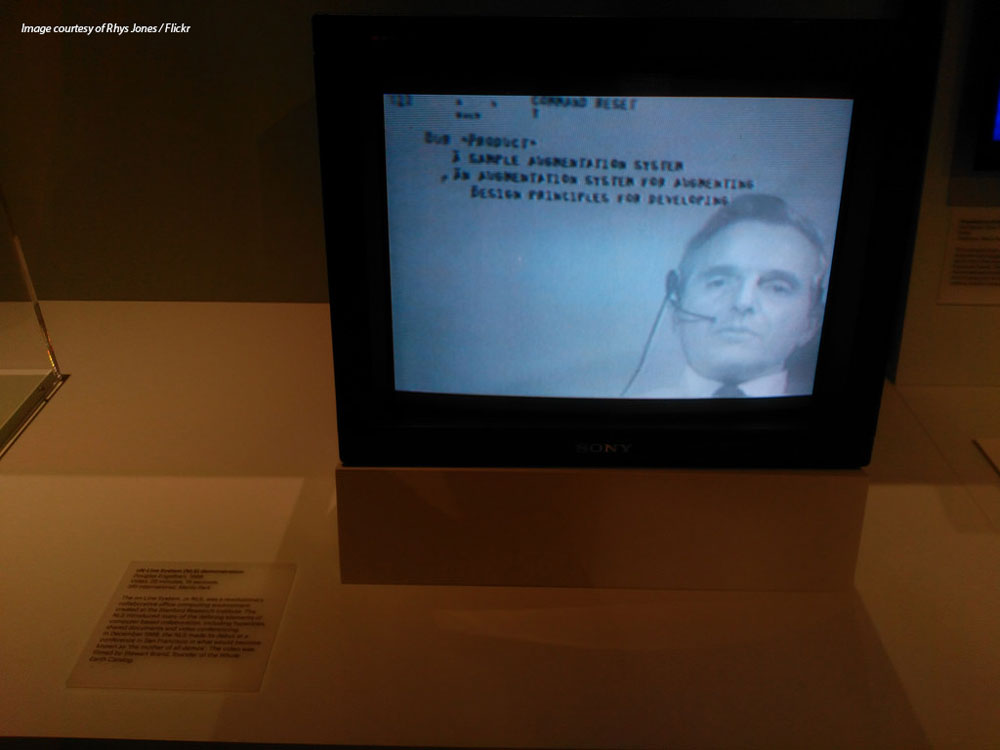 Today nearly every technology company gives demos to showcase their products’ best. What is the oldest demo you have in mind? In this article Oscar Santolalla takes us back to a ‘milestone event’ in the history of computing, and explains how even today, 50 years on, it teaches valuable lessons to anyone wanting to demonstrate their products with maximum impact.

The Mother of All Demos

Let’s go back in history. Year 1968. It was a world without Internet, without personal computers. Computers existed, huge scary machines, whose size easily occupied half of a room, operated exclusively by people wearing lab coats. The masses believed that computers were to serve corporations and governments, not people. Silicon Valley existed too, but unlike today, was not shipping cool apps and gadgets. Its companies and research centres were busy with defence contracts and building military technologies.

But meanwhile, in that dystopian world, a team of computer researchers were cooking something truly amazing.

On December 9, 1968 exactly 50 years ago, a thousand of people gathered at San Francisco’s Brooks Hall to see the unseen. The audience came to watch Douglas Engelbart’s work of research: futuristic devices and software created to empower people.

The team showed the very first videoconference, between San Francisco and Menlo Park and they could see each other’s faces and interacted with their computers (it was like FaceTime 50 years ago). The team showed the very first computer mouse, the first hypertext, the first word processor, a collaborative real-time text editor and many other ‘firsts’.

This ground-breaking demo ran with almost no glitches and ended with a standing ovation. This session, originally part of the ACM/IEEE—Computer Society’s Fall Joint Computer Conference, and later baptised as The Mother of All Demos, inspired a generation of technologists that in the 70s, 80s and even in the 90s created what we have today. Both Gates and Jobs—as well as other venerated entrepreneurs—owe a lot to Engelbart.

Today’s presenters can learn a lot from this one-of-a-kind event. Among many, these are three key takeaways:

1) Set the context before you begin

Engelbart and team were about to show a dozen new technologies, most of them very unfamiliar to their audience. Engelbart put all the pieces into a single framework, telling the big ‘why’ of this research work. He started saying,

If, in your office, you as an intellectual worker were supplied with a computer display, backed up by a computer that is alive for you all day, and was instantly responsive the reaction you have, how much value could you derive from that?

That was a pretty concrete way to set the context. The audience could paint a picture in their minds and imagine themselves working in the near future.

Often, the points you will make will be unfamiliar to your audience. In these cases, take your time to explain the context in just a couple of phrases. Be as concrete you can. Let them be immersed in your world before you begin. Naturally, don’t tell too much and leave your audience wanting to hear more.

2) Take risks and bring your best work to the spotlight

Engelbart took risks, fist of all in showcasing technologies that nobody was using, even no other similar research centres. Indeed, a few of the inventions failed. The five-finger equivalent to the qwerty keyboard never took off because of its steep learning curve. Conversely, the mouse became a ubiquitous invention which is here to stay. That’s why it was funny to hear apologies from Engelbart’s mouth:

We call it a mouse. I don’t know why we called it a mouse, sometimes I apologize to people for that. It just started that way and we never did change it.

The team also took risks in such an elaborated setup that switched among video streams both local and remote. But it was worth the effort as it made a show in itself. Throughout the session, Engelbart repeatedly referred his whole demo as a ‘show’.

You might have unfinished or unproven work, untold stories in which you already put a lot of effort. They might be ready to show to the world. Do like Engelbart’s team and wrap them as a coherent package. Also, remember Frank Gehry’s words:

Your best work is your expression of yourself. Now, you may not be the greatest at it, but when you do it, you’re the only expert.

In the case of stories, you will never know if they resonate with an audience until someone hears them. Bring your best work to the spotlight.

Engelbart and team could have shown the same series of demos in a back room; they could have shown only the computer screens or the interaction of two people in the auditorium. But they knew that a real-time video communication between two locations would be have much more impact. They worked on ways to orchestrate such a performance. The result for the audience was seeing several people in different parts of the screen at different times, Engelbart’s hands showing the peripherals, and most of the time seeing the computers’ screens while the wizard was presenting his astonishing research. They brought a real theatre stage, never seen in any computer conference before. As Florian Mueck explained in an interview, this is Aristotle’s Decor and Spectacle combined, artifacts that presenters almost never work on.

You can be the phenomenal presenter too. Create a theatre stage by bringing décor and spectacle. Décor is the stage design: bring holograms, props, a magnificent stage background. In Hollywood movies, spectacle is the technical special effects. Use your body for the special effects: clapping, vocal variety, twists, enthusiasm, etc. It’s bringing your story into life.

The Mother of all Demos not only brought the computer mouse, showcased the first video conference and presented novel data structures for programmers. It also became one of the best presentations in history. Thank you Engelbart and team.

If you have never watched the full video of the Mother of all Demos, watch it now. It’s a fascinating trip to the past and well worth 100 minutes of your time. We all can learn from this historical event.

Be inspired with the Mother of all Demos, and be the next to make history! (And for more inspiration you can check out other great demos in What We Can Learn From the Products That Changed History.)