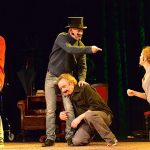 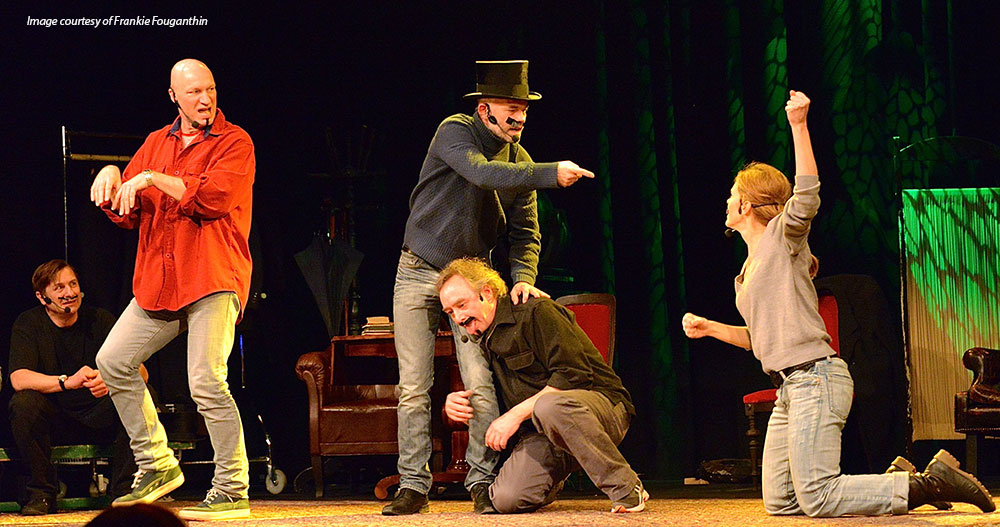 More and more however, ‘presentation’ isn’t about some distant figure onstage telling you about how exciting your KPIs are and how everyone’s passionate about ROI in Q3 as we leverage synergies going forward.

It’s more often about those informal, impromptu moments: networking, pitching to five people, the ‘town hall’ with questions coming from all quarters, or bumping into someone, dealing with clients and colleagues in unstructured interactions.

Somebody once said that management is conversations, interrupted.

For the majority of our lives, the ‘presentation’ we give is unprepared. We are improvising. These impromptu ‘scripts’ may not all be entirely novel but based on previous discussions or thoughts we’ve had. However, frequently you do have to think on your feet.

People want that ‘in the moment’ confidence

As an example, more and more, the Q & A nowadays forms the majority of oral pitches, which people either love or hate.

On one hand, there is that young advertising account guy who, when I asked what was going through his mind when presenting, admitted it was, ‘Please, please, nobody ask me any questions.’

On the other hand, individual leaders, preparing for that oh-so onerous conference speech, often tell me, ‘I love the Q & A but feel flat in my prepared piece. How can I transfer some of that energy?’ They feel they can be more their true selves without a script.

I often help leaders who glumly bring me a script and a torrent of slides put together by their eager young team, with not a single thought for their boss’s performance. S/he is dreading the gig. ‘How will I remember all these words, and in the right order?’

I look through the slides and nod sagely as they read out someone else’s essay – because that’s how it feels. Then we put it away and I ask what makes them excited – or annoyed. Suddenly they come alive, as they improvise stories and tell me what really matters. I make them record what they say on their own smart-phone. Not everything is usable. But so much is. And they own it. We harvest what is spontaneous then create structure around it.

So why not learn from those whose job is to improvise?

Turn the clock back many years. I was in a university revue. We wrote sketches. We performed them and then edited based on audience reactions. We toured. We honed our product. We knew how to deliver each line to elicit the right laugh. By the end of the summer, we had a sleek vehicle ready to take the Edinburgh Festival by storm.

That’s where our tour manager came back raving one night about a show she had seen. An improvised show. It was really funny, she said. No, no, I insisted. To be funny it had to be written and rehearsed.

Two years later I met Mike Myers. He had just arrived in London and didn’t know anyone. The only work he found was selling tickets at a pub theatre for a show I happened to be in.

He opened my eyes to Improv.

It started with a social worker in 1920s Chicago. Viola Spolin was creating exercises to help inner city children grow the confidence to speak up in class. Her son saw that these games could become a wonderful form of theatre in their own right. By 1959 he had created Second City Theatre Company. I had heard of it because so many alumni went on to Saturday Night Live. I loved The Blues Brothers and Alan Alda from M*A*S*H, so had found out where they had come from. I knew they did sketches.

Mike Myers had been in their Canadian touring troupe. They do improv shows after the main (written and rehearsed) revue and sometimes characters and situations emerge in the improv sets that are then developed for future scripted shows.

Eight months after we had met, Mike and I were onstage together for the first night of the Comedy Store Players, an improv ensemble. We’ve just celebrated our thirty-third anniversary.

Improv is not stand-up

People confuse improv with stand-up. Stand-ups have scripts. They may not have written them down. They may ad-lib along the way. But they’ve honed their stories and rhythms through months on the road. It’s very different from ensemble improv, which explicitly sets out to create a unique show each time, based on that night’s audience suggestions.

I talk about improv, not just ‘improvisation’. Improv is a discipline in its own right.

The Rules of Improv

Like any art form, loose rules have developed through years of trial and error. The main one is to listen to your fellow player. Treat what s/he says as an ‘offer’, something to build upon, a gift to be accepted and returned with a ‘yes and’ ethos not ‘yes but’.

Some people call this ‘plussing’. The early pioneers of improv found that more interesting stories developed if they built on their fellow player’s idea rather than knocking it down (which we call a ‘block’). It’s best when you take turns and give one offer at a time. You have to still your inner voice, which cannot help but plan a step or more ahead. I call this ‘intentive’ listening. We listen with intent to explicitly use the offer we have been given. We try to make our fellow player look good.

With this simple discipline, you are never short of something to say.

Apply this to life in general and it reframes our attitude. One of my fellow evangelists for bringing the improv ethos to a wider audience, Robert Poynton, wrote a book called Everything’s an Offer. Whatever happens in life, acknowledge it then use it to move forward. That tricky question or even heckle is actually an offer in disguise, giving you an opportunity to win the audience over in a way that would not have been possible without it. When the tech goes wrong, don’t just stand there. Impress your audience by your ability to ride the misfortune. It’s a blessing in disguise, but only if you act to make it so.

Everyone knows that if you ‘fail to prepare, you prepare to fail’. But let me add to that. You should also prepare to improvise.

Chief at Improv Your Biz
Neil Mullarkey is a performer, consultant and author who has spoken in 24 countries about improving communication. Find his book on people skills at neilmullarkey.com. His new joint venture For One Night Only aims to help companies create winning pitches.