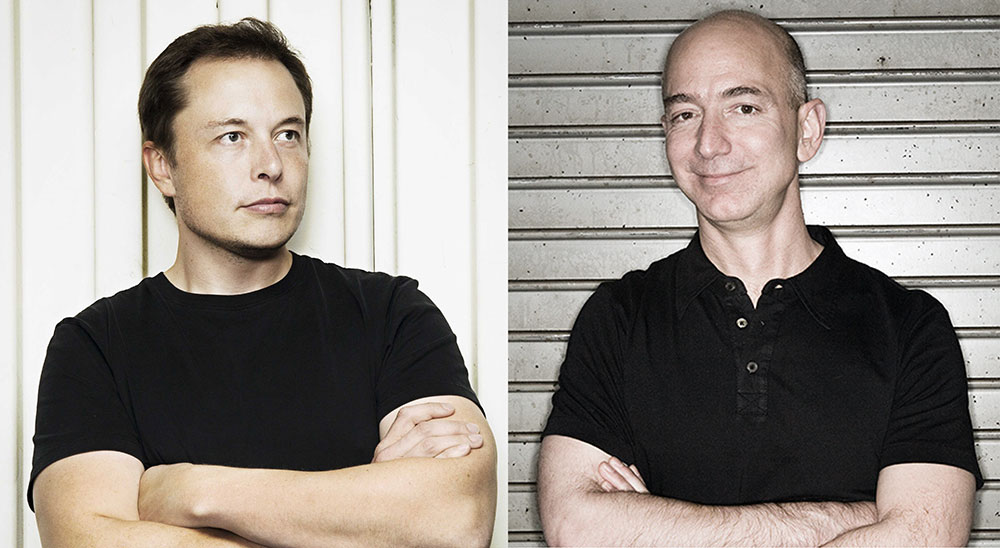 We’re delighted to welcome Oscar Santolalla to the team at Presentation Guru. He’s an experienced Product Manager in the software industry and has seen more launches, product demonstrations and technical presentations than most people. Here he identifies Messrs Bezos and Musk, 2 very well known tech entrepreneurs as potential role models for technical presenters.

If you are asked who the best public speakers are today, most probably the first faces or names that will come to your mind will be those of politicians, authors of business books, superstar-level coaches, preachers, and only few of you will name someone from the technology arena. What can you expect? Steve Jobs is gone after all, right? Nevertheless, the technology field has its own superstars who inspire millions of techies and non-techies too.

In this article I am going to show you two currently active personalities who inspire us every time they express themselves in public: Jeff Bezos and Elon Musk.

He walked to the podium, put his paper on the lectern, looked at the audience, made an intentional silence and then he started straight telling a story: “As a kid, I spent my summers with my grandparents on their ranch in Texas…”

He kept reading his speech while keeping good eye contact with the audience, almost how a seasoned politician does. The speech was successful, showed some emotional moments, and there again a great example of how to use pauses effectively.

The speech was titled “We Are What We Choose”, which main message came clear and timely for a just-graduated audience; however the speech could have ended stronger. The speech’s script itself is a highly recommended read.

In February 2003 Bezos participated in TED 2003 with the talk “The electricity metaphor for the web’s future.”

It was a great talk in which he showed in a very engaging way plenty of concrete examples of how the Internet compared to the early days of the electric industry.

It was funny to see how Bezos had to come over and over, close to a desktop computer in order to move his slides forward with the keyboard. That was his only ever TED appearance, a strongly recommended video to watch.

I would summarize Bezos’ style in three points: great body language, effective vocal variety and simple language. As a proof of his belief in simple language, in 2014 he sent a memo to his employees banning PowerPoint during internal meetings. Bezos almost always looks very confident and you will rarely hear hesitations while he speaks.

Another moment that called my attention was his use of quotes while answering questions. During an interview for Business Insider’s Ignition 2014, Henry Blodget asked Bezos: “Why doesn’t it bother you as it bothers other people that the company is not profitable?” Bezos immediately answered quoting Warren Buffet:

and then he elaborated his answer further to express that Amazon is a “rock concert” company.

His best product demo was during Fire Phone launch, in which he presented this phone’s unique features “Firefly” and “Dynamic Perspective”. Both features caused a very good impression in the audience, especially when thanks to Firefly, the phone recognized that the video being played at the auditorium’s main screen was “The Kingsroad” episode of the TV series “Games of Thrones.”

That was its “WOW” moment. Fire Phone launch and demo went flawless and reminded me a lot to Steve Jobs’ iPhone launch back in 2007.

Undoubtedly the best Elon Musk speaking appearance has been Tesla Powerwall Keynote (April 2015). What could have ended as a “just average” announcement of an inherently unsexy product (electrical batteries) became a paradigm of how to create and deliver an effective technical keynote.

Many bloggers made the analogy with a TED talk, because of the length and style. Yes, Musk looked nervous and showed hesitations, but thanks to evident preparation and flawless orchestration, the final result was a big success. Why?

In my opinion there were three main elements that made it successful:

The interview was hosted by TED curator Chris Anderson.

It was a fascinating conversation in which Musk showed his extraordinary ability to explain complex things in a simple language. The style is very similar to Linus Torvalds’ TED interview “The mind behind Linux”, which was featured in February 2016. Not surprisingly, Musk’s TED interview ended with a standing ovation.

I would summarize Elon Musk as a storyteller and a master in explaining complex thing in easy terms. He is an introvert and he stutters and stumbles a bit, so in terms of delivery he is not the best example to follow.

However he always speaks with strong confidence. His humble style and openness also helps him to be likeable to the audience. Overall he is an effective and inspiring communicator.

Definitely Elon Musk is becoming a product demos’ master. Why? In Musk’s demos you will see:

The first nicely orchestrated demo Musk presented was “Tesla Beating Audi in Refueling Contest” (June 2013). In this demo he showed how Tesla cars’ battery swapping was much faster than refueling a regular car in a gas station. The demo showed two camera shots simultaneously. In the end, refueling a Tesla proved to be twice faster than an Audi.

As I already mentioned earlier in this article, during Tesla Powerwall Keynote, Musk presented a demo. Just three minutes before ending the keynote he surprisingly displays a camera zooming in towards two power meters labeled “Grid” and “Battery”, and once the zooming stopped Musk says “Oh, the grid is actually zero.” This was a surprise ”WOW” moment which unveiled that everything he had just been talking was not the future, but the present.

Another impressive demo is the launch of Tesla Model X in September 2015.

Comparing these two amazing entrepreneurs is difficult. They have very different speaking styles but both successfully communicate and inspire other with his products, ideas and especially their own vision.

Regardless, if we work in the technology arena or we don’t, we all can learn a lot from Bezos and Musk speaking styles and lastly, be inspired.