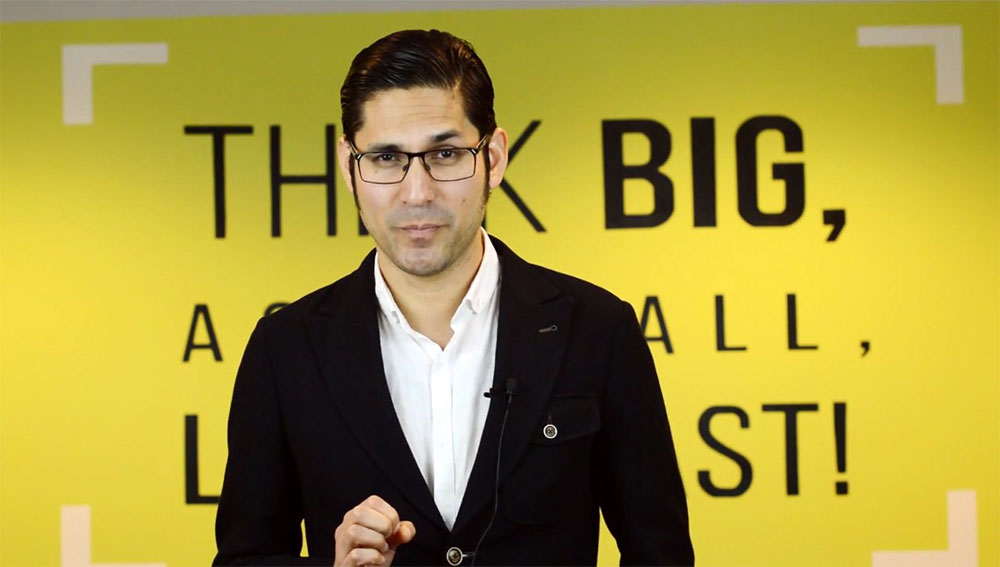 Oscar Santolalla has spent more than three years as a Product Manager in the software industry. Either onstage or on blogs, he advocates making technical presentations and product demos that engage and inspire. In his podcast, Time to Shine, he interviews successful public speakers who share their best stories and secrets.

We want to help our readers build their skills as presentation designers, speakers and coaches, learning from a wide range of our colleagues from across the world. In this unique series, The Guru’s Big Five Questions, we ask the same five questions about inspiration, hopes and role models in the ever-changing arena of world-class presenting. Here’s what Oscar thinks:

The greatest speech in history has been lost in history, I am sure of that. I am also sure that it was not spoken in English either. However, from our most recent times, I can’t imagine anything more remarkable than “I have a dream” by Martin Luther King Jr.

The speech was an amalgam of poetry, storytelling, rhetorical mastery, that expressed the speaker’s vision with courage, and that leaves the listeners with a taste of hope. We should never lose hope, no matter how hard times are.

“I have a dream” is also a great example of how a speaker can improvise according to the moment. In the manuscript that King had in his hands, there was no mention of the phrase “I have a dream” at all. These words were internalized in him and ready to be paraphrased at the right time. The speech was reaching its end when Mahalia Jackson cried out “Tell them about the dream.” The rest is history.

Ultimately, this speech is an inspiration for anybody who wants to mobilize people for noble causes. This speech and its significance must be widely and continuously taught so it will ignite leaders anywhere, anytime.

Imagine that your job is to pitch a product that is overwhelmingly perceived as boring, very techie, and even dirty. Your product is an electric battery. Can you imagine an inspiring keynote about a new battery? Elon Musk made it happen.

By 2015 the general opinion was still very sceptical about solar energy products. In May 2015 Elon Musk brought this to the spotlight and announced that Tesla would start shipping energy products.

The main reasons why Elon Musk’s Tesla Powerwall Keynote is worth analyzing and using as a benchmark for business presentations are:

1. Great structure – Starts with the problem followed by a solution. Then the product comes, the benefits, and finally a call to action.
2. Great use of words – “Cell phones leapfrogged the landlines and there wasn’t a need to put landlines in a lot of countries or in remote locations” was a spot-on phrase. With this analogy, Musk showed that deploying electrical grid infrastructure in many places in the world would not be needed at all.
3. Great use of visuals – Among other gems, Musk showed that a tiny blue square within the map of USA was the area needed to power the entire country with solar electricity.
4. Great demo – Towards the end of the presentation, when Musk had already won his audience, he went beyond words and slides to show a demo. With this magic trick, he showed that the product already was solving a real problem.

Politicians come and go, and often the most outspoken aren’t the ones who make the biggest impact. Instead, causes’ spokespeople ignite flames that go beyond countries, political affiliation and anything else that divide us. Today, Malala Yousazfai deserves a special recognition for her still short career as an orator. When I hear more of her speeches I always get impressed not only with her words but with her conviction and courage.

Already at her 16 she showed proficiency in a skill that many mature speakers still struggle: reading a speech while looking at the audience. Yes, the skill that Cockran taught Churchill one century earlier. Watch her 2013’s address to the United Nations and you will get impressed too. She wants to bring education to all children in the world, and she needs all countries to help on this cause.
Malala just gained admission to study a bachelor’s degree in philosophy, politics in Oxford. This seems to ensure that we will have in Malala an even stronger orator in the years to come.

For speeches, find the best possible personal stories that match the situation and your audience. No matter if you talk in a political context, business, non-profit or just in a social event, you need personal stories.

Once you have identified your best stories, work on finding the most effective narrative. Iterate until the flow is easy to follow and the main point of the story is crystal clear. And remember to write them for the ear, not for the eye.

A few years ago I got my first inspiration from the greatest speakers in the technology arena: Jeff Bezos, Mikko Hyppönen, Steve Jobs, Guy Kawasaki. I also found Jack Dorsey’s story of how his imagination gradually conceived Twitter truly fascinating.

Today, Elon Musk, Jane Marie Chen, Gerd Leonhard, Dananjaya Hettiaracchi and Hans Rosling (died last February) are some of my favourite speakers. I’m not only inspired by their communication skills but by the inspiring work they do and spread to the world.