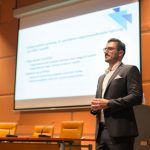 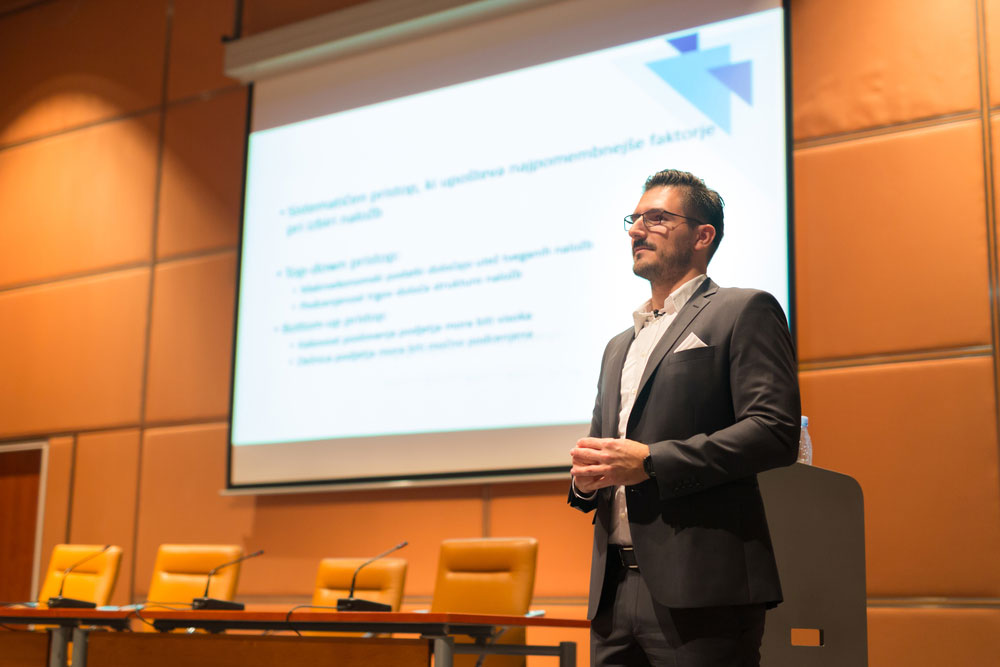 A story from Spain

I teach public speaking and presentation skills at a few Executive MBA Programmes in Switzerland and Spain. A few years ago, I was teaching a class at IESE in Barcelona.

One of my students was a fellow named Manuel. He was bright, thoughtful and fully engaged. He also spoke fast. Very fast, even for a Spaniard. Sí, Manuel habló muy rápido. And there were few pauses between his sentences. At times, I wondered how he could breathe.

I kept encouraging Manuel to slow down and pause, but to no avail. So I tried a different tactic. I stood up and walked to the back of the class behind the other students.

“Manuel,” I said, “I want to you to do your speech again. Whenever I hold up my hand signaling ‘Stop!’ you must stop talking. And you cannot begin talking until I lower my hand.”

It wasn’t the most elegant way to speak, but after a while we developed a rhythm. When we were finished with the exercise, I asked him how he felt during the pauses.

“Terrible!” he exclaimed. “It was so hard not to talk. I could feel my heart beating and everyone was looking at me.”

I then asked his fellow students what they thought. They were unanimous is saying that the pauses had improved the speech dramatically.

“Manuel,” I continued, “I understand that it can feel uncomfortable to pause, but you know what? It doesn’t matter. Because it’s not about you; it’s about the audience. If you don’t pause, it’s difficult for us to follow your thoughts and ideas. And if we are struggling to keep up, it doesn’t make you look good.”

Silence is golden … but not easy

When I work with clients to help them improve their pubic speaking skills, I always tell them that one of the most important things that they can learn is when to say nothing at all.

And yet, many people have a hard time with pausing, even for one or two seconds. The reasons are varied but common ones that I hear include:

While understandable, especially for novice speakers, when we step back and look at these concerns objectively, we see that they do not stand scrutiny:

So what does happen when you pause?

Mark Twain said, “The right word may be effective, but no word was ever as effective as a rightly timed pause.”

I agree but that begs the question, when should you pause when speaking in public? I mean, you can’t replace all the words with pauses. You have to say something.

There are several, powerful ways to use the pause to maximum effect. Below are seven examples of when a pause will be ‘rightly timed’ and effective.

1) The pause before you start

When you take the stage, you get one chance to make a good first impression. So don’t rush things.

Walk confidently to the place where you are going to begin speaking, look at the audience and smile. Take a deep breath and as you do so, imagine that you are drawing the energy of the room in. Slowly exhale and begin speaking.

This routine should take no more than 10 to 15 seconds (including the walk) but it will make you look confident and in control. And, if someone introduces you, you should pause even longer because after you have shaken hands with your introducer, you should not start speaking until he or she has left the stage and is seated.

In his great book, Speak Like Churchill, Stand Like Lincoln, James Humes devotes the first chapter to pausing before you speak. He concludes by telling readers, “Stand, stare, and command your audience, and they will bend their ears to listen.”

2) The pause to signal that something important is coming

Pauses can let people know that you are about to say something important. For example, let’s suppose that I am giving a talk about team productivity.

I share a number of ideas about how teamwork can be improved in an organization and now I am coming to the most important point. I might say something like this:

“Without question, there is one characteristic that all high-performance teams have that is essential to their success. Even if your team does the other things that I have said, if it doesn’t have this characteristic, you will not achieve your full potential. [pause] That characteristic [pause] is …”

The pause lets people know that they should pay attention to what I am about to say because it is important.

3) The pause to let the message sink in

Just as pauses can be used at the beginning of an important idea, so too can they be used immediately after something important has been said. When you convey a message that you want people to remember, pause after saying it.

4) The pause when moving to a new topic

Often I see speakers who have done a good job organizing their presentation by topic. However, when reaching the end of one topic, they rush headlong into the next. The presentation resembles a train with the cars jammed up against each other.

Far better to pause between the topics to let your audience mentally shift gears as you begin to talk about something new.

“We’ve seen the devastating impacts that plastic garbage is causing in the oceans. But creative people coming up with ways to turn the situation around. [pause] I want to share the stories of three companies that are doing just that. [pause]”

The final pause marks a clear delineation between two distinct parts of the presentation and allows the audience a moment to refocus. You can also combine a pause at this point with taking a sip of water or moving to a new location on stage.

5) The pause for emphasis

A pause can be used to emphasise a key point or statistic. For shocking statistics, one can heighten the dramatic effect by combining repetition with the pauses.

“According to the United Nations Environment Programme, one-third of all food produced in the world is lost or wasted every year. [pause]”

“In the United States alone, $161 billion worth of food goes to waste every year. [pause]”

These statistics are shocking and it is important to let the audience feel their full weight.

6) The pause to get your audience to reflect

Sometimes you want your audience to reflect on an issue. You can do this by asking a rhetorical question, or by asking them to think about a topic or situation.

This technique is great for engaging the audience because it allows each member to personalize the subject for himself or herself. However, if you do not leave space between the rhetorical question / request to think about something and your next statement, you will frustrate your audience. You need to give them time to think about how they would respond before you give your response.

“I’d like you to think about a time that you had a difficult conversation with a colleague at work. [pause]”

Note that you can let this type of pause run for 5 to 10 seconds and it will feel completely natural for the audience.

7) The pause when answering questions

Allowing people to ask questions is a great way to make your presentation interactive. But when people ask their questions, look at them, listen actively and then, when they are finished, pause before answering.

It comes across as rude and only serves to highlight that the speaker had stopped listening and formulated the answer while the audience member was still speaking.

It is far better, and common courtesy, to listen to the question with an open mind and then think about it before you answer. The audience will appreciate your thoughtfulness and you will probably give a better answer.

How to improve your pauses when speaking in public

We pause all the time when during normal conversations that we have throughout the day, but we almost certainly do it instinctively. Still, if you can pause when speaking to your friends, you can pause on stage.

While nothing can replace getting up on stage and speaking over and over again, here are some ideas for you to try:

The music of your speech

Back in Spain, as the course progressed, Manuel (and several others) made a concerted effort to slow down and pause. By the end of the week, great progress had been made and everyone agreed that pausing at the right moment significantly improved the quality of the speeches.

There is an old saying among musicians: Music is what happens between the notes. Arthur Schnabel, a classical pianist from Austria, describes it in this way: “The notes I handle no better than many pianists. But the pauses between the notes? Ah, that is where the art resides!”

It is the same with public speaking. A great speech happens between the words. Because it is during the pauses that we can reflect on the significance of what you have said and make it relevant for us.

And that is how you make an impact.

How to Decide When You Should Talk Fast or Slow

How to… Break the Pattern

Your Voice: The Most Powerful Tool You Have

10 Tips for Using Your Voice