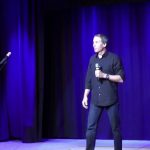 Kudos to my friend and co-founder of Presentation Guru, Jim Harvey. Jim recently took the plunge and jumped into the world of stand-up comedy. He shares some of the things that he has learned in this post, Taking it to the Next Level: Stand Up Comedy – How Hard Can it Be?.

I particularly liked Jim’s lesson about finding your unique comedy persona and the ways in which all speakers – including those who will never do stand-up – can enhance their own persona when on stage. As Oscar Wilde said, “Be yourself; everyone else is already taken.”

I have long been a fan of stand-up comedy, and have enormous respect for those who get up on stage to make us laugh, whether they are famous professionals or aspiring amateurs or even just Jim!

And I have also dipped my toe into the waters of stand-up. It’s been a thrilling experience, though not always for the same reasons. Like Jim, I have found that doing stand-up, even just a few times, can add a whole new dimension to one’s public speaking. It’s like Red Bull for the stage.

Lessons from the world of comedy

My favourite comedian of all time is Steve Martin. I discovered him in the 1970s when I was a teenager. His album, A Wild and Crazy Guy, was a revelation. I eventually got all of his comedy albums on vinyl and spent hours listening to them.

Jerry Seinfeld, another comedian whom I admire, called it “one of the best books about comedy and being a comedian ever written”.

Not only is the book fascinating, it contains powerful insights not only for aspiring comedians, but for anyone who is going to speak in public. Below are five quotes from Steve Martin’s memoir; each is followed by the lesson that we can learn.

1) It takes effort to be good

The consistent work enhanced my act. I learned a lesson: it was easy to be great. Every entertainer has a night when everything is clicking. These nights are accidental and statistical: like lucky cards in poker, you can count on them occurring over time. What was hard was to be good, consistently good, night after night, no matter what the abominable circumstances.

If you want to get good at public speaking, you must work at it. It takes time and effort. As Ralph Waldo Emerson said, “All the great speakers were bad speakers at first.” Keep at it. Seek out speaking opportunities. You will get better. But don’t rest on your laurels, especially if you deliver an excellent speech or presentation. It is more important to be good every time you step on stage.

2) You have something to say

I had a short-lived but troublesome worry. What if writing comedy was a dead end because one day everything would have been done and we writers would just run out of stuff? I assuaged myself with my own homegrown homily: comedy is a distortion of what is happening, and there will always be something happening.

I came up with several schemes for developing material. “I laugh in life,” I thought, “so why not observe what it is that makes me laugh?”

You may think you have nothing to say. There is always something to say. Be aware of what is going on during your day. Carry a small notepad. Jot down ideas that come from things that you see. Start a story file. You never know when these experiences will fit into a speech or presentation.

I gave myself a rule. Never let them know I was bombing: “This is funny, you just haven’t gotten it yet.” … It was essential that I never show doubt about what I was doing. I would move through my act without pausing for the laugh, as though everything were an aside. … Another rule was to make the audience believe that I thought I was fantastic, that my confidence could not be shattered. They had to believe that I didn’t care if they laughed at all, and that this act was going on with or without them.

The new physicality brought an unexpected element into the act: precision. My routines wove the verbal with the physical and I found pleasure trying to bring them in line. Each spoken idea had to be physically expressed as well. … I tried to make voice and posture as crucial as jokes and gags. Silence, too, brought forth laughs. … Precision was moving the plot forward, was filling every moment with content, was keeping the audience engaged.

You might have great content, but poor delivery can diminish its impact. Body language is important; vocal variety is important; pausing at the right moments is important. It’s not about acting; it’s about engaging the audience.

Great speeches and presentations stick with an audience long after they have left the venue. And even though the audience will most certainly forget most, if not all, of what you said, they will never forget how you made them feel.

It’s one thing to draw on the experience of others; it’s quite another thing when you have to do it yourself. But that’s the best way to learn: when you have “skin in the game”.

My first attempt was in Munich. My friend Mel Kelly is a professional speaker and comedian. He is from Ireland but now lives in Germany. Mel runs Comedy Club Munich, the biggest English-German comedy show in the city. A couple of years ago, when preparing for a business trip to Munich, Mel encouraged me to do a 7- to 8-minute set at his show. Here’s the result:

It was a great crowd in a great venue. The fact that Mel told them that it was my first attempt at stand-up certainly helped, but I was happy with my performance and the reaction that I got.

A couple of months later, I was working in Barcelona, Spain. I checked out the stand-up scene before travelling and got myself a set one evening a small bar in the heart of the city’s famous Gothic Quarter.

The ambience was very different from Munich. The room was much smaller and underground. At the start of the show, there were perhaps 30 to 35 people, but by the time I was called to the stage (around 11:00 p.m.), there were maybe 15 to 18 people left. And those at the back of the room were talking to each other!

I delivered pretty much the same set that you saw in the video above. There were smiles and a few chuckles and that’s about it. The experience was completely different from that in Munich. I felt like I would die right there on stage.

But the experience was worth it. Mel says that such is the life of a stand-up comedian. It’s easy when you have a big crowd that is energetic and laughing. The real test comes when you perform on small stages to small crowds that are only half interested. That’s gut-check time.

As stated above, doing stand-up comedy will yield many benefits that you can use when giving a speech or presentation. Here are five:

1) You will learn to work with humour

Humour is an important element in almost any speaking situation. In another post on Presentation Guru, I examined the benefits of humour in a presentation and some of the ways in which you can use it. I am not recommending that you leaven your corporate presentations with a series of one-liners. You can be humorous without telling jokes, but all jokes involve humour. By doing stand-up, you can get a feel for different types of humour and which ones work best for you.

2) You will learn to pause

Delivering a joke is not just about getting the words right, it is about the set-up. And pausing is a big part of the set-up. Also, if you get a laugh, you have to pause and let the laughter run. If you start speaking too soon, you “step on the laugh” and cut the audience off. They may not hear your following words and they might even be reluctant to laugh the next time. Learning to pause is one of the most important skills any speaker can master.

3) You will learn time management and how to pace yourself

When I performed in Munich, I was one of about a dozen or so acts that evening. Mel had everything timed down to the minute. Our instructions were clear: stick to your time or be called off stage. So I worked on the material, trimming and cutting and also factoring in potential laughs, so that I would have the right pace and stay on time. When you stay on time, you respect the audience.

4) You will learn to connect with an audience

Almost all stand-up comedy is just the comedian and the audience. No slides, no props, just you. Comedy writer Jack Bernhardt says that stand-up is unlike any other art form. “With music or theatre, there is something else to keep an audience entertained: a story, a melody, other actors. With standup, it is just a microphone and a comedian.” You have to engage the audience. You have to look at them, interact with them and keep their attention. These are all things you should do in a presentation.

5) You will build resilience

Not every joke works. Many bomb. Sometimes the audience is small or timid or whatever and you have the kind of experience that I had in Barcelona. It builds character and it teaches you that just because a speech or presentation does not go perfectly, it is not the end of the world.

You might think me mad, but I am going to encourage you to give stand-up a try. You read that last sentence correctly. There are just too many benefits for you not to have a go at it.

Most large cities have comedy clubs or establishments that have comedy nights. Look for one near you and see if they have an open mic night when amateurs can get on stage and do a set. You might just surprise yourself at how funny you are. And even if all does not go according to plan, you will learn valuable lessons from the experience.

So now it’s over to you. If Jim and I can do it, anyone can!