The title slide is prime presentation real estate. You can either choose to invest in it or miss a great opportunity to grab you audience’s attention from the start. Here John Zimmer makes the case for rethinking the potential of the title slide and gives ideas on how to make the most impact when opening your next presentation.

The gateway to your presentation.

The sign that tells your audience where they’re going and who’s going to take them on the journey.

Titles slides often contain such details as the date of the presentation, the name and location of the event, the logo of the speaker’s company, contact details and more. In fact, it is not unusual to see a title slide like the example below or some variation of it. 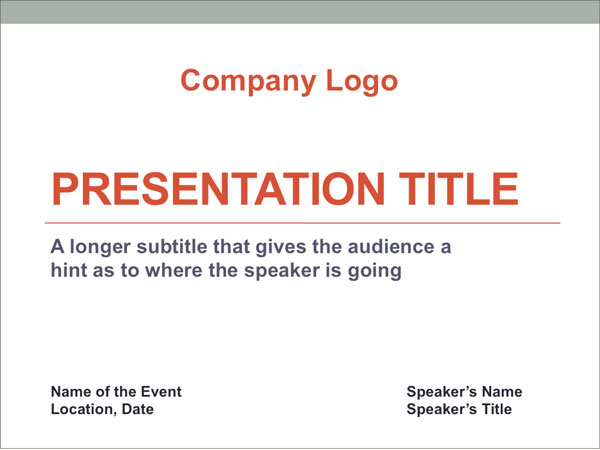 Now, there is nothing inherently wrong, per se, in having a title slide like this. It conveys important information about what is to come. But it is bland and all too common.

What’s worse, what often happens, is that this slide is projected on the screen before the speaker takes the stage. The speaker is then introduced and proceeds to say something along the lines of the following:

In other words, the speaker starts by telling the audience things that they already know because they have already read the title slide. Not a great way to begin. In fact, by beginning this way, many speakers waste one of the most important parts of their presentations, the opening.

Psychologists talk about the learning principles of primacy and recency. People tend to remember the first thing they hear and the last thing. So the openings (and closings) of your presentation are important. You don’t want to waste them.

This post is not about designing a good title slide – there’s plenty of information elsewhere about design principles; rather, it’s about thinking differently about title slides and how to use them.

I’d like to share three ideas for you to consider with regard to title slides. These ideas might seem unconventional – and to the extent that most presenters don’t follow them, they are – but whenever I have seen them used, the results have always been positive.

Idea No. 1 – You don’t always need a title slide

There is no rule that you need a title slide for every presentation that you make. This is especially so if there is an agenda for the event that clearly states your name and the subject of your talk.

Instead, make your first slide black and have it showing before you are introduced. The audience won’t even know it’s a slide: they’ll just see a black screen.

When you are introduced, walk on stage and begin speaking while the screen is black. The audience will be 100% focused on you because there is nothing on the screen to distract them. At the appropriate point, transition to your first substantive slide and continue the talk.

When participants in my corporate trainings try this approach, the feedback from their peers is overwhelmingly positive. The audience feels more connected with the speaker and a solid foundation has been laid for the rest of the talk.

Idea No. 2 – You can start talking and transition into the title slide

This idea is a variation on Idea No. 1.

As above, you begin your talk with a black slide. You open, for example, by telling an interesting fact or making a bold statement or telling a story. Of course, whatever you say, it should be related to your talk.

Once you have completed your opening comments and have grabbed your audience’s attention, you click into the title slide and tell them where you are going to take them.

This type of opening reminds me of the opening to a James Bond movie. If you have never seen a Bond movie, they usually open with a riveting scene involving high drama: a high speed car chase; skiing down a mountain; jumping out of a plane; or some other adrenalin-pumping activity. Once the scene is over, things calm down and we find out what the plotline of the film will be.

The good news is that you do not have to be James Bond on stage. (Though if you are, I for one will be pleased to buy a ticket.) But you can use the technique of a powerful opening and transition into the title slide to achieve a similar effect.

Idea No. 3 – Start with a substantive slide and click into the title slide

This idea is a variation on Idea No. 2. However, instead of a black slide, you begin your talk with a substantive slide on the screen and then transition to the title slide.

A few months ago, I was working with a young start-up company that has created an incredible device to help people who have been injured regain the use of their legs. Their device has been featured on CNN as part of an exposé examining the incredible technological breakthroughs that are being made in this field. I was helping them with their pitch.

They began with the usual, title slide and explained who they were and what they did. They then transitioned to their second slide, which was an amazing full screen image, and they told the amazing story behind it.

During the feedback discussion, I said, “Let’s try something. Let’s start with the image and put the title slide second.” I then reversed the two slides in the PowerPoint. “OK,” I told them, “go right into the story and then click to the title slide and tell me who you are and what you do.”

So they did, and they were almost jumping up and down with excitement over how much better it was. Now, they began with a compelling story that hooked you from the outset. After their story was completed, they clicked into the title slide and said, “We are [Company X] and our passion is to help people like [the person in the above-mentioned story].”

And as I told them, I had not done much; just swapped two slides. But little changes can make a big impact.

So there you have it. Three ideas to consider when it comes to title slides; three ideas that can give the opening of your next presentation a shot in the arm.