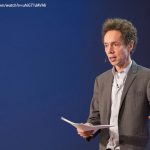 You know who he is. He’s the zeitgeist-shaping author of such popular classics as Outliers, The Tipping Point and Blink. He’s popularised performance psychology and brought millions of readers to consider such fundamental human questions as:

All of his books ask and answer interesting, challenging and relevant questions for the reader and he helps us understand ourselves and the world just a little bit better. He’s a great writer. He’s also a speaker. His publishing success has led to many high-profile ‘keynote’ opportunities that he wouldn’t ever have had otherwise.  He’s no Barack Obama, by his own admission, and he does have a calm, careful, sometimes ‘too-slow to start’ style; but he brings a beautiful, gentle honesty to his speeches that is really compelling. He’s a brilliant reminder that there are hundreds of ways for shy, ordinary people to be brilliant when they stand up to speak.

I listened to him, a couple of years ago, on the BBC’s ‘Desert Island Discs’ Radio show and the interviewer asked him what the secret to being a good speaker is. He replied with this:

I like the challenge of standing in front of a group of people and being required to reach them… People have travelled to be there and what an audience wants is to be taken seriously. They will put up with a lot if they have the sense that you have thought about what you are doing with them in some considered way. Once they get that sense from you they will travel with you in many far and distant directions.

What turns off an audience is the notion that you’re giving them the same speech you’ve given many times before; that you didn’t even think about them that morning or about what you wanted to say. As long as I communicate the notion – you are special to me; I’m giving you this talk for a reason – then you’re fine.

Isn’t that his, and most other engaging speakers’ attitude? They think that their job is to honour the time, experience and intelligence of the audience and make sure that they get something useful out of the the time that they have given to the speaker. They understand that an audience wants to feel important for the time they are with you. Every single one of them. Malcolm Gladwell’s humble, pragmatic and respectful approach is a model for every current and would-be speaker. Here he is at TED talking about choice, happiness and spaghetti sauce.

He’s engaging, charming and interesting, isn’t he? And he really seems to care about us, doesn’t he? How many of the really bad business, motivational and other speakers that we see give us the impression that they haven’t thought about us at all, and will never think about us again the moment that they step down from the stage? They show and tell us that they don’t care.

Malcolm Gladwell is that strange kind of charismatic that I find so often in my work with businesses. He’d never label himself as such, and if you asked 100 people to name their most charismatic speaker, his name would never appear on anyone’s list except mine. But if charisma is essentially the skill of making an audience feel something that you want them to feel, then you can see why Mr G would be near the top of my list.

He feels for the audience as he prepares; he cares for the audience as he speaks; and he lets his infectious, quiet fascination for his subject wash through him and into us. He’s a role model for the everyday person who would like to make more of a connection with an audience when s/he speaks. He does most of the verbal and non-verbal things that a charismatic speaker should do, and he does them deliberately, sincerely and naturally.

If you want to add a little bit of Malcolm into your schtick, then these articles will give you some great hints and tips on connecting with your audience:

How to Move Hearts and Minds with These 12 Easy Hacks

Why You Should Never Underestimate the Power of the Spoken Word

Your Next Presentation – It’s Not All About You