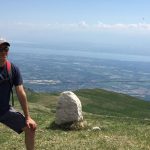 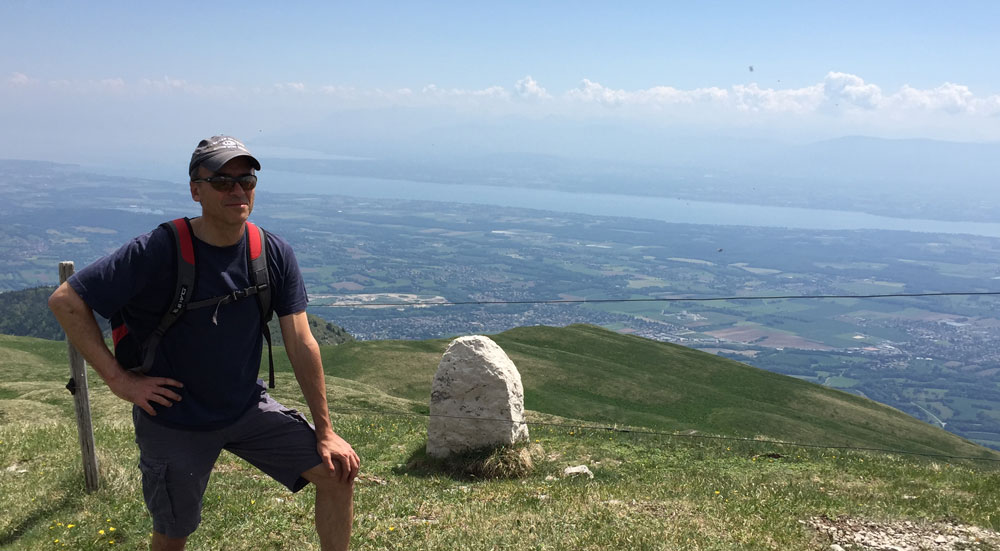 A few weeks ago, my friend Timo Sorri came to Geneva for a visit. Timo is an expert in presentation design. You can learn more about what he does on his website. And, you can read his answers to the Guru’s Big Five Questions here.

While he was here, Timo and I worked on a few ideas, including what will be our fourth annual Master the Art of Presenting conference in Helsinki, Finland in November 2017. But Timo’s trip wasn’t all work; he wanted to get out and see some of the sites around Geneva. So, during his stay, we visited the medieval town of Gruyères (including the museum that features the wild art of H. R. Giger, best known for his creation of the alien in the movie … Alien!), walked along the shores of Lake Geneva in city of Nyon and toured the excellent Red Cross Museum in Geneva, among other things.

But our most challenging exploit during Timo’s visit was a five-hour hike in the Jura Mountains just across the border in neighbouring France. We drove up to the ski resort at the top of the Col de la Faucille (Altitude: 1,323 metres) and set off on foot from there. It was quite a workout. According to my FitBit, that day we walked 25,665 steps or 19 kilometres. We climbed 226 floors and burned 3,663 calories. So when we went out for dinner that evening with my wife, Julie, I was able to enjoy a hearty meal, confident that I had burned more than I had consumed that day!

Along the way, a few things happened that got me thinking about public speaking (as many things do) and the lessons that all speakers would do well to heed.

As an avid cyclist and skier, I have spent a lot of time in the mountains. It doesn’t matter whether you are going on two wheels, two skis or two feet, when going into the mountains, you need to bring a huge amount of respect for mother nature. The weather can change quickly and unanticipated circumstances can arise. You need to be prepared.

The day was warm and sunny. Timo and I brought walking sticks, fully charged cell phones, sunglasses, caps, sunscreen, light sweaters, food and water. I was surprised how many people we encountered along the way who were not as equipped as we were. 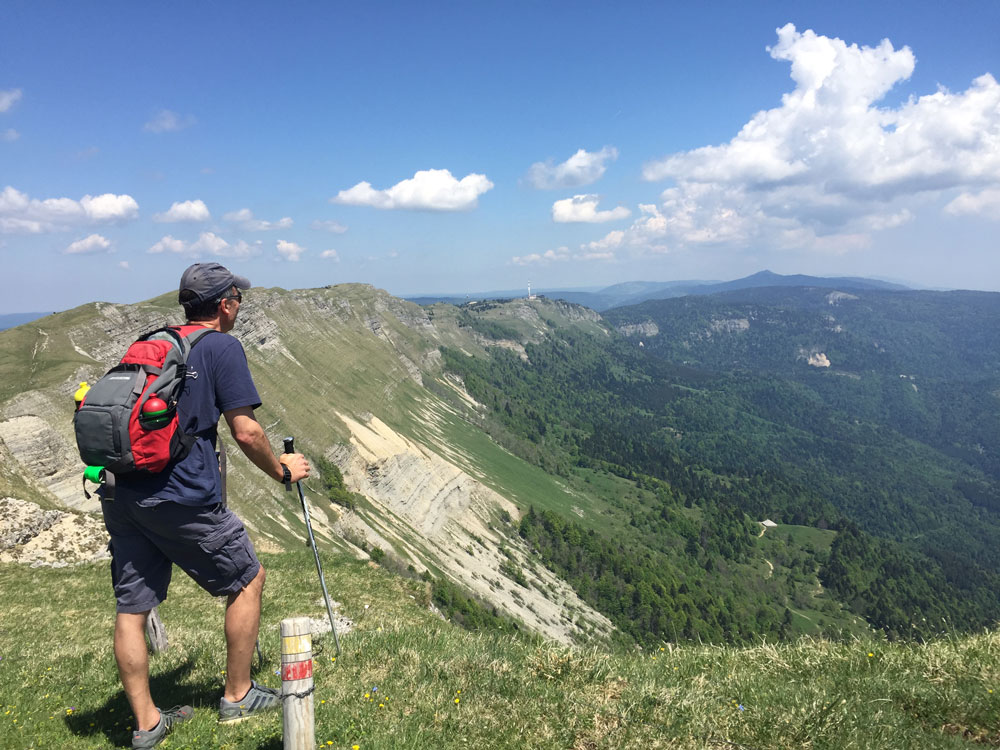 When you have a speaking engagement, there are many logistical things to remember. You need only forget an adapter or have the batteries in the remote die or even not know where to park to have your presentation go sideways.

There are too many details to mention here. However, I have created a comprehensive single-page checklist that is free to download, print and share as often as you like. There is also space for you to add things about which I might not have thought.

You will not need every item each time you speak. (That’s why it is a checklist: check the things you need and forget the rest.) And, some of the items might seem like minor things; but in my experience, minor things are minor right up until the moment they become major things!

Lesson 2 – The unexpected can happen and you have to adjust

We began our hike by walking up what is, during ski season, a gentle green run. My daughters learned to ski at this station when they were younger, so I know all the runs very well. The thing is, I know them much better when they are covered in snow and I am going down instead of when they are green and brown and I am going up!

The lower part of the run is actually a road and so we walked along, climbing steadily, for a good while. I kept expecting the road to turn left but it just kept meandering along and upward. After a while, it became clear that we were not where I had expected us to be.

I wasn’t worried, but we had hoped to climb to the top the mountains to have a spectacular view of Lake Geneva and the Alps beyond. This route was not going to get us there, at least not soon enough. Eventually, we reached a point where the forest to our left gave way to a steep but beautiful meadow. It gave us a challenging, but clear, path to the summit and so we left the road and began our ascent in earnest.

It’s all part of the public speaking deal. You should be prepared but you should also be prepared to deviate from the plan if the circumstances call for it.

An excellent way to get better at handling unexpected situations is to try improvisational theatre or improv. I have been doing improv for years. Not only is it a lot of fun, it hones your ability to be completely in the moment and to deal quickly and smoothly with the unexpected. I’ll discuss improv in more detail in a future post.

Lesson 3 – There is no such thing as perfect public speaking

As Timo and I climbed steadily towards the summit, we frequently though that the summit was just ahead, only to reach the top of a crest to find that, in fact, there was more climbing ahead.

Public speaking is like that. As good as you may be, there will always be more to learn. My friend, fellow speaker and business partner, Florian Mueck, says – appropriately for this post – that public speaking is a mountain without a peak. We will never reach perfection, but we can all climb higher.

Whether you consider public speaking to be a mountain without a peak or a journey without an end or, for the mathematically inclined, an asymptote; the important thing to remember is that you can always get better. Great speakers understand this point and constantly work to improve themselves. They learn from past mistakes and build upon past successes in order to become better speakers. That is the challenge for all of us.

Lesson 4 – At some point, you have to leap

Eventually, Timo and I did make it to the top. Hey, this wasn’t public speaking; it was “merely” a mountain! And, even though we were at around 1,650 metres, that is not the highest point in the Jura Mountains.

The view was spectacular, even if the Alps were somewhat shrouded in clouds. It was wonderful to sit and take in the glorious view all around us. Several others had also climbed to the ridge, among them, three paragliders. They were assembling their equipment when we arrived and so we decided to watch them.

The first two took off soon after they had all their gear in place. They pulled their wings (chutes) up into the air like a kite, ran down the slope and soared away. The third fellow watched them for a while, stood up and prepared to go, but then sat down again. This happened a couple of times and he consulted with some others who had come along to help the paragliders. Eventually, he stood up once more, got his wing up and flew away after his friends. 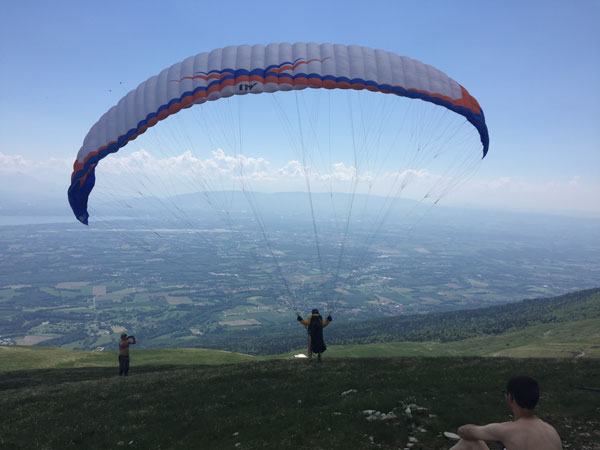 I am not a paraglider so I cannot be sure whether the third guy was nervous, whether he was waiting for favourable wind conditions or whether he was concerned about some matter. Paragliding comes with its risks and safety is paramount. I have great respect for those who practice the sport.

But as I watched him, I was again reminded about public speaking. If you want to get good at it, the only way is to take the leap and do it. The practice, the books, the videos are all great. But nothing compares with the real thing.

Sooner or later, you have to take the plunge and speak in front of a live audience. That is when the real learning takes place; when you have some skin in the game.

Will you make mistakes from time to time? Of course! And your mistakes will be some of your greatest teachers. So, as Mark Twain said,

“Throw off the bowlines. Sail away from the safe harbor. Catch the trade winds in your sails. Explore. Dream. Discover.”