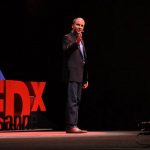 John Zimmer is one of the founders of Presentation Guru and is well known as an international speaker, trainer and lawyer. He is a seven-time European champion of speech contests and writes the internationally recognised blog about public speak, Manner of Speaking.org. He is also the co-creator of Rhetoric – The Public Speaking Game™.

We want to help our readers build their skills as presentation designers, speakers and coaches, learning from a wide range of our colleagues from across the world, so in this occasional series, The Guru’s Big Five Questions, we ask the experts the same five questions about their inspiration, their hopes and their role models in the ever-changing arena of world-class presenting. This is what John had to say:

I don’t think that there is a single “greatest” speech. There have been many outstanding speeches throughout history. Different speeches will affect different people in different ways.

For me, a great speech is one that awakens something within the minds and hearts of the audience members, one that gets people thinking about something larger than themselves. For me, the greatest speeches in history are the ones that appeal to people’s sense of the possible, of what could be if we worked together.

Speeches that I would count among history’s greatest would include Abraham Lincoln’s Gettysburg Address (1863), Winston Churchill’s Never was so much owed by so many to so few (1940), John Kennedy’s Ich bin ein Berliner (1963), Martin Luther King’s I Have a Dream (1963) and Nelson Mandela’s Inaugural Address (1994). But there are undoubtedly many more across different cultures and languages.

Again, I hesitate to pick a single presentation as the greatest. However, I would like to single out for comment a wonderful talk by Sumantra Ghoshal, the brilliant Indian scholar and Professor of Strategic and International Management at the London Business School.

This is a video on YouTube of him speaking at the World Economic Forum. His talk is known as The Smell of the Place and it is wonderful, even though it was delivered while sitting at a table with other panelists.

In this talk, Ghoshal speaks of corporate culture and why so many companies have created an atmosphere that discourages employees from making an effort to bring about change.

I love this talk because Ghoshal speaks with eloquence and passion, two qualities sorely absent in many business presentations. He is completely in the moment, speaks in a tone that is both compelling and conversational, and uses a wonderful metaphor to make his point. Finally, despite his renown and obvious intellect, Ghoshal comes across as humble and genuinely concerned about the state of modern corporations.

His talk is well worth eight minutes of your time.

I am going to stretch the boundaries of this question and pick two political orators from recent times.

The first is former Canadian Prime Minister Pierre Elliott Trudeau. Growing up in Canada, I heard him speak a lot. He had a razor-sharp mind and a rapier-like wit. He was masterful in debate – calm under pressure and skilled in the art of rhetoric. Trudeau was fluent in English and French, able to adapt his speaking style in either language depending on his audience.

A more recent example of a great political orator is Bill Clinton. When he speaks, he has this ability to come across as if he is having a personal conversation with you. And his capacity for deviating from the script and being in the moment is incredible.

It’s a two-part answer, but the parts are two sides of the same coin.

First, every speaker should be clear in his or her mind about the key message of the speech or presentation. As an exercise, I challenge my clients to write their speech or presentation in one or two sentences. That’s it. One or two sentences. It’s a useful exercise because it forces speakers to think clearly about the message and help them to eliminate extraneous material.

Once a speaker has the key message clearly in mind, he or she needs to ask the following question: Why should the audience care? It is a fundamental question because every speech, every presentation is about the audience. It’s not about the speaker or the speaker’s company, organization, product or service.

Many a speech or presentation has failed because the speaker has not taken the time to reflect on why the audience should care. If you cannot answer that question, you may well be giving the wrong speech to the wrong audience. But when you speak about something that is relevant for the audience, that’s when amazing things can happen.

My wife and daughters are a source of constant support and inspiration.

A number of very close friends who are also speakers – Florian Mueck, Olivia Schofield, Mel Kelly, Bob Mohl, Conor Neill, Jack Vincent, to name a few – have always been supportive and willing to provide advice, help and a kick in the pants when needed!

Finally many people (too numerous to mention) whom I have met through Toastmasters or who have been clients or who have contacted me via my blog, Manner of Speaking, have encouraged me in my speaking career.

Nowadays, my biggest source of inspiration comes from my audiences. Seeing their reactions and talking to people after delivering a speech or giving a training is incredibly motivating.