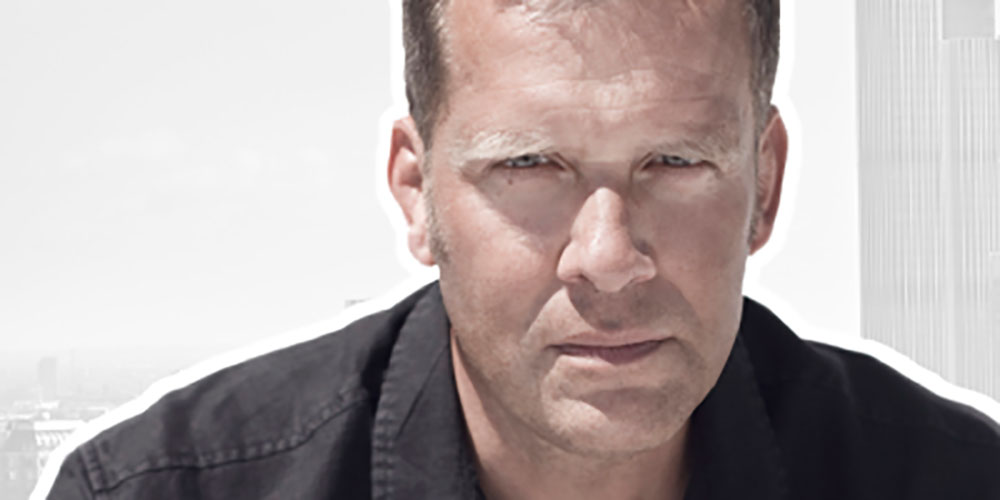 Jim Harvey is the founder of The Message Business, a company which helps FTSE 100 companies sell themselves, and their products better. Jim has many years of experience speechwriting, presentation coaching and motivational speaking. All his experience of pitching and presenting shows that there is no ‘one right way’ to present, but there are themes that work in most places, for most speakers, with most audiences.

We want to help our readers build their skills as presentation designers, speakers and coaches, learning from a wide range of our colleagues from across the world, so in this occasional series, The Guru’s Big Five Questions, we ask the experts the same five questions about their inspiration, their hopes and their role models in the ever-changing arena of world-class presenting. This is what Jim had to say:

There are so many great speeches in life. JFK’s Moon landing speech, Neil Armstrong’s ‘One small step for man’; and so many more in fiction, including my favourite – Mark Anthony’s ‘Brutus is an honourable man’ from ‘Julius Caesar’ by William Shakespeare. I just love great words, and sometimes I do that copywriter’s trick and copy those great words out, word for word to get a deeper understanding of the style and form of great writing for speech.

I love speeches political, speeches hopeful, speeches desperate, with words said with tears, to remind us that speaking in the real world is so much more than just long lists of dead nouns and abstractions. How about an anguished Charles Spencer’s farewell to his sister Diana at her tear-stained, state funeral in 1997? You’d have to go a long way to hear a more moving speech on a more doleful day than this.

As an Englishman I would normally feel duty-bound to choose something that rings down the years for us. And usually, I’d probably choose our greatest orator of the modern age, Winston Churchill. If I did, I’d pick his ‘We’ll fight them on the beaches’ speech.

Politics aside, it’s a great speech for a few simple reasons:

In many ways, Churchill was more important as a symbol of British defiance than as a leader, and he was never as important after 1942, when the USA joined the war.

Today, however, I’m going to choose a different speech. I’m going to choose ‘Ain’t I a woman?’ by Sojourner Truth, a freed slave from the USA, speaking to a crowd of mostly white, mostly male abolitionists at a rally in Ohio in 1846. It needs no more introduction than that, and here it’s read by Alice Walker, American poet in a simple and truthful way, without any ‘performance’. The beautiful, simple, angry words, spoken softly, speak for themselves. You can imagine the woman looking those entitled, pompous do-gooders in the eyes and reminding them all of the difference between an abstract concept (abolition), and what it really means. She defines slavery simply and beautifully (if that’s possible), and contrasts it and her journey through life to freedom with those of her audience. It’s still moving and inspiring 170 years after she spoke the words.

Bill Clinton at the Democratic National Convention in 2012. Charm, balance, statesmanship, passion, charisma, call to action, appeal to reason in pursuit of ‘selling’ Obama to a sceptical nation after the fire of ‘Yes we can’ had died down. He understands so well that he’s selling to a potentially hostile crowd (the 50 million Americans at home who are doubting Obama) and so he does what great orators do. He ascribes to them the highest possible motives, the highest principles of fairness and reason, and he honours them as men (and particularly) women who will make the right decision for the right reasons.

He never lectures or hates; he doesn’t criticize or complain, he speaks to them as decent, ordinary people, at least his equal in everything. Brilliant.

The National Union of Students (NUS) in the UK is a training ground for our political leaders of the future. It’s notoriously and gloriously left wing. Dominated by lots of angry, educated and shouty teenagers usually. Malia Bouattia is their latest president and she’s loathed by many of her peers for her anti-Israel, and anti-freedom of speech agenda that has blazed through university campuses in the UK in the last year. Here’s a video of her speech at the NUS election.

It’s a good speech because she was under criticism from her own organisation. She characterized the far left intolerance and intransigence in a very divisive election campaign, and though she had won she was now under siege from an interested and much more liberal UK press corps. The speech is interesting because it’s a ‘snow-job’ in many ways. A clever attempt to present herself as a moderate while not actually apologizing, or offering reconciliation. It is as much angry and narrow as Clinton’s was balanced and warm.

Also, it’s a speech that is delivered awkwardly and using an iPhone as her cue, which takes her away from the audience, so it’s not perfect by any means, but it’s honest, raw and heartfelt; however wrong I might think she is.

And it proves one thing over many others. You can be dry-mouthed, breathy, nervous and less than perfect and still make a strong impression on a crowd. One thing that you can say about Malia Bouattia is that she’s utterly committed to her subject and she makes her point.

Olivia Schofield, and our guru founder Emma Banister talk about women sometimes feeling that they don’t have a right to speak. Here is a young woman who has faith in herself and in her message. So I include it here. Imagine what she could be if she was a more skillful speaker?

Connect with the crowd before the event, as you’re writing the presentation. Do you see the world as they do? Do you know what it’s like to think like them? Do you understand how they might see your message? If you do you can begin to write words that will influence them with empathy and honour rather than anger and disrespect. That search for empathy as you write the words will show at the event, in your speech and be remembered long after the event is over.

My first boss Rory, a charismatic Irishman, who could charm the birds from the trees which is good because he had very little else going for him.

Also my second boss, Steve, because he taught me how to tell great stories to engage the audience – one problem, he was the least sincere man I’d ever met and so I found it inspiring the first time, insulting the second time and infuriating once I knew that he was a pretty nasty piece of work all through his life.

Who inspires me now?

The everyday charismatics, not the superstars. Those who speak with integrity and warmth, without status or power. Just their ability to tell stories, share emotions and be real, and of course there are the great singers – Adele, Emily Sande, Robbie Williams.