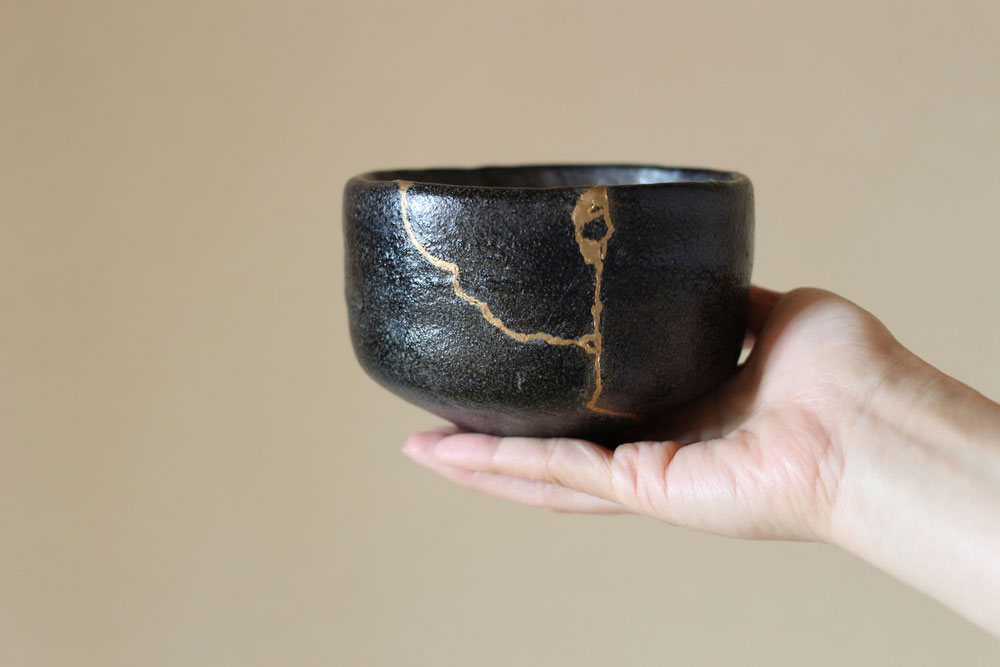 If you want to grow as a speaker, you can’t learn if you don’t fall, and it’s not whether, or how far, you fall that defines you, it’s how you get up, dust yourself off and carry on. In this article Jim Harvey shares with us 3 times where he got it badly wrong and explains the lessons he learnt. Unfortunately there are more than 3 things that can go wrong for the public speaker(!), so this post is the first in a series.

There’s a Japanese art form called kintsukuroi. It’s the art of mending broken pottery with gold, or silver, in the belief that the broken, but mended, pot will be stronger and more beautiful than before. Most often it is, as the photographs show. 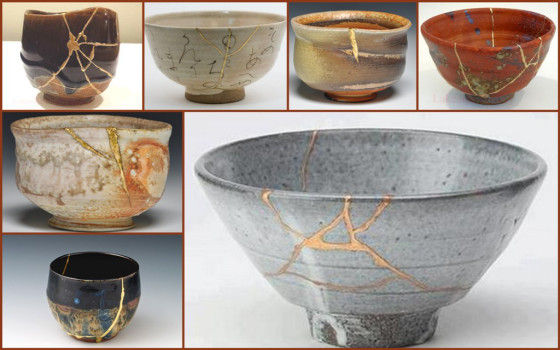 The idea that something that has been broken into pieces can be fixed with love and skill and be better than ever is a beautiful idea, isn’t it? And if I think about it, I realise that all of us are a bit like that, aren’t we? Our lives may be perfect without the tragedy, falls and failures, but they are brighter, deeper and more vivid for being fixed, and emerge stronger into the sunlight.

I was inspired to think about how I, and other presenters, develop over time. I thought about the painful lessons that we all have to learn, that have allowed us to grow stronger, more skillful and more effective once the scars have healed. Here are 3 examples of when I have got it wrong and the lessons that I have learned from each event. Then there’s a set of examples of the falls and failures of some really famous people.

I was working with a group of people in Warsaw, Poland. They had been together the day before and when I met them they were slightly resentful that I wasn’t the same guy that they’d worked with on day one. They were all in their mid-twenties, and I am much older, so there was a bit of a ‘gap’ between us at the start.

Realising this, and hoping to relax them, I told them a story about how I had flown to New York for a day with an Ad Agency’s creative team. I’d never met any of the creative team before, and as I’d walked into the room, (a slightly greying 49-year-old), they had looked at me and thought ‘Who’s Grandad?’; and I had looked at them and thought ‘Where’s the ‘grown-up’?’. However after 10 minutes of working together all that tension disappeared and we’d had a great day.

When I started telling the story to this group in Poland, I was sure that it’d make my point that we can just get on and work together and we’d have a productive and enjoyable day. But as I told the story, I realised that I had got the emphasis wrong, and that rather than tell them a tale of how first impressions are easily overcome, it had turned (through my own fault) into a tale about how young people (them) could learn a lot from listening to their elders (me).

So at the end of my tale, the group just sat there looking at me as if they had just received an angry lecture from an old git. I had turned a suspicion into a fact. I had switched them off right at the start of the day with the wrong story.

Show a doubting audience that you’re OK and that your experience can help them: don’t tell them, because at the start of the day they won’t believe you. And if you’re going to tell a story to make a point, make sure that you choose the right one. Show them – don’t tell them.

2) The joke that fell flat

I was leading a pitch for a big bit of consulting work with a financial services company. We had a good relationship with the buying panel; we had created an honest, interesting and original written response that had got us selected to the final three; and we had received a lot of feedback that we were in a very strong position against the other 2 agencies we were up against. The head buyer had whispered to me as we came into the room that all we had to do was convince the Director from Head Office (who we had never met before) and we were ‘in’.

Our 20-minute pitch went really well. We made our points, we got some tough questions from the Head Office guy as we  went through our proposal but by the time we said, ‘That is our pitch, now we’ll be happy to take any more questions that you have…’, I was confident that we’d ‘aced’ it. In fact it was one of those rare moments in pitches, where it seemed that the atmosphere in the room had changed from ‘scrutiny’ to ‘open, honest discussion’. What could possibly go wrong?

The Head Office guy said, ‘Just one more question. I’ve really enjoyed your pitch, and I’m wondering, as the piece of work is about leading change, how you go about that in your business. Could you give us an example of how you approach, lead and respond to changes in your Company?’

It was a great question. As I looked around at my team to show them that I would take the lead, I was confident that I could show that we followed the rules and approaches that we had outlined in the pitch. I opened my mouth to speak, and decided to start the response with a self-effacing comment.

‘Well obviously, as consultants, we’re terrible at this kind of stuff…’

The room laughed, liking my joke about consultants, and everyone, except one person, nodded and listened as I went on to explain how we were actually quite good at it, but that we’d had to learn how to do it to ourselves, before we could really understand how clients might respond.

The one person who didn’t laugh at all, and who didn’t listen to my answer, was, of course, the Head Office guy. I knew that I, all by myself, in that one, ill-advised, throwaway line had ruined the moment and queered our pitch. We didn’t win the work and the head buyer, in giving feedback a week later, said to me, ‘Jim, you blew it…’

In the more formal occasions, answer the questions; don’t get too confident; and don’t ad-lib jokes; because they might help, but they probably won’t. And in this case, the joke didn’t really add anything to the answer.

3) You were just rubbish

There was a day recently when I was running a session with the senior management team of a long-established client. We were creating a new strategy for the business, and I was in a room full of ‘friends’, with a couple of new faces that I didn’t yet know. At one stage, one of my clients said, graciously,

‘Jim. We’re a bit stuck here. You’ve usually got something interesting to say, any ideas?’ Instead of saying ‘No. Not a single clue in my head…’ I took the baton and thought ‘Hmmmm, maybe there’s something there, half an idea, isn’t it a bit like that case we worked on a few years ago with client X’.

And off I went. I seized a marker pen, approached the white board, and started talking and drawing and writing. 10 minutes later, even I was confused. What was I trying to say? And as I looked at the whiteboard full of random words, lines, arrows, stick people and starred, abstract nouns, I realised that I was as lost as the glassy-eyed team in the seats. I was rubbish. In those moments, I find that honesty is the best policy. I stopped talking, looked around the room and said,

‘Mark, remember all those minutes ago when you said ‘Jim, you’ve usually got something interesting to say, any ideas?’ Mark nodded. ‘The answer should have been a resounding ‘no…’’ Luckily, they laughed, and I said ‘Shall we take a 20 minute break and see where we are after that?’

They leapt out of their seats with an energy never usually seen in an accountancy firm, and we took a break. When we reconvened, I’d talked with Mark and a few of the other people in the room and we’d decided on an approach that worked. They forgot about that awful 10-minutes, but I never will.

For the confident, experienced speaker, sometimes the very best thing to say in answer to a question that puts you on the spot, is ‘That’s a really good question. Let me think about it, over coffee, and I’ll respond when we get back.’

Ego and flattery can often lead you to try to answer on the spot, but answering on the spot can lead to some embarrassing moments.

It’s not whether you fall, it’s how quickly and how far you rise again

The key lesson for anyone who who wants to be a better presenter, is that sometimes, no matter what you do, you are going to fall flat on your face. So you’d better learn how to fall. And though I’ve shared some of my own humiliations here (more to follow in the next post), everyone who speaks for a living makes mistakes and has things go wrong. Here are a few howlers from some really famous people. Notice how our response to them is based on how they respond, rather than what happens.

He panics, spoils the show and everybody remembers it.

He doesn’t panic and no-one remembers it.

The presenter seeks to blame someone else, the victim handles it beautifully.

There is no saving grace for Mrs May. She blew it. It will define her forever.

Here’s a brilliant post by Sandra Zimmer on how to get over your fears as a public speaker and handle a ‘disaster’ if it happens to you. And finally, you can read the next article in this series here: Fixed with Gold – 3 More Painful Lessons That Help the Presenter Grow