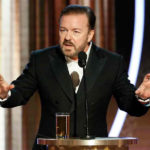 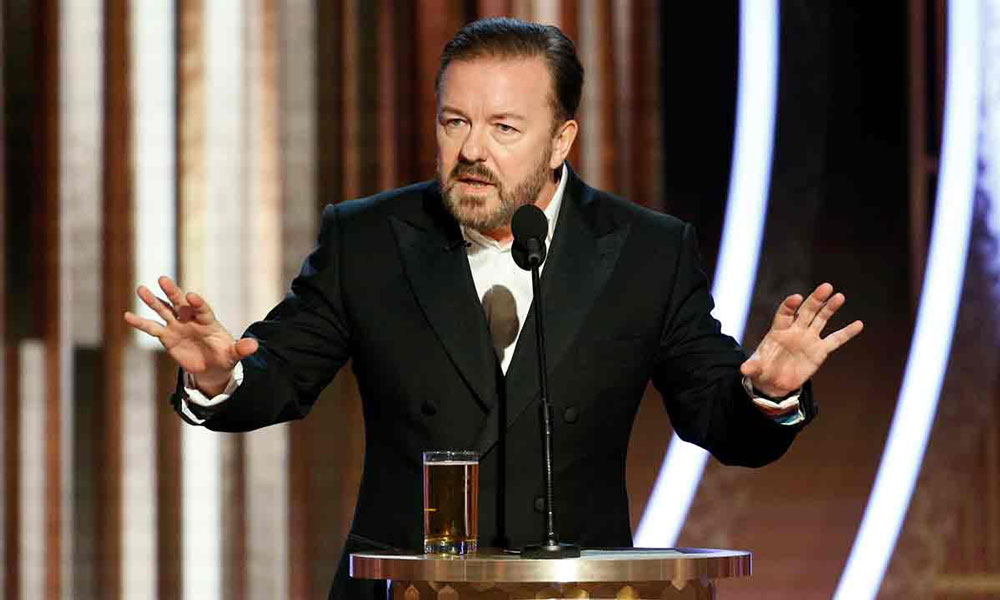 Ricky Gervais, the overexposed English comedian, writer, and actor, hosted Hollywood’s Golden Globes for the fifth time. His four previous appearances as MC for the awards created a lot of publicity for the Awards themselves and for him, as he has repeatedly set his sights on the rich and famous as targets for his wince-inducing jokes.

This year, he promised that he would be even more controversial, and he delivered on that promise, on the night. Everybody in showbiz had an opinion about his performance. Some thought that he was hilarious and brave for holding his star-studded audience to account; some thought him awful for every slander, slur, and slap in the face he delivered to his tuxed and bejewelled crowd.

“I don’t care” was the recurring refrain of Ricky Gervais’s Golden Globe hosting gig on Sunday. Those three words were fired off after his every other crass or impolite zinger, whether he was chastising Leonardo DiCaprio for his youthful dating preferences, proposing to solve the problem of no female directing nominees by banning women from making studio movies, or simply calling James Corden a ‘fat pussy’ (because he’s in Cats, geddit?). “I don’t care!” Gervais repeated, reminding us for the umpteenth time that he wouldn’t be doing this again.

Ricky Gervais first came to attention in the UK with an obnoxious persona on the Channel 4 comedy programme The 11 O’Clock Show in 1999, in which his foul-mouthed character produced a stream of invective on current issues. Two years later, he went on to present his own comedy chat show for Channel 4 called Meet Ricky Gervais. It was poorly received and has since been mocked by Gervais himself. Part of the problem for that show and for the man himself was that audiences were confused about his comedy persona.

Most comedians with his type of act choose to adopt a comedy character as the vehicle for the appalling things that they say and do. Sacha Baron Cohen has used Borat, Ali G, and Bruno (Gehard) to make people laugh, and there has been no confusion in the public’s minds over which is the act and what is the ‘real’ man. We might object to the humour, but we realise that the schtick is a creation, not a real person.

Ricky Gervais made a conscious decision all those years ago not to use a ‘front’ for his comedy and, to some degree, has paid the price for that over the years because some people think that he is as outrageous as the things he says.

Ricky Gervais is a fictional character

It’s important to remember that the man who goes home to his partner, Jane, and their cats after an event like this, isn’t the same man that stood on the stage saying things that reverberated all around the world via social media. Ricky Gervais is a professional contrarian. He has always looked to find the zeitgeist and work against it. He is suspicious of the status quo and the moral superiority of crowds. In a recent interview with The Hollywood Reporter, before the Golden Globes he said:

People like the idea of freedom of speech until they hear something they don’t like … So there’s still a pressure, but that doesn’t mean I’m going to water it down or back down and not say what I want. It’s just another form of what we’ve been through many, many times … It’s a good thing to not be racist and sexist and homophobic. But it’s not a good thing to not be allowed to make jokes about those things, because you can tell a joke about race without being racist. I’m happy to play by the rules. It’s just that the 200 million people watching have different rules. That’s the plight. When people say, ‘He crossed the line’, I say, ‘I didn’t draw a line, you did.’ It’s relative. It’s subjective.

What can we learn from Ricky Gervais at the Golden Globes?

The simplest lesson for professional speakers is that if you’re going to offend anyone, it’s much better to do it deliberately, than by accident. There was not a joke or a word that Ricky said on Sunday evening that he hadn’t considered very carefully beforehand. He knew what he was doing, and he’d probably had every word checked by lawyers representing the Hollywood Foreign Press Association, and the TV channel screening the show. Nothing happened by chance. Ricky looked around him and saw tanned, comfortable, wealthy and happy people in the room and decided that:

So he roasted the people in the theatre and entertained and/or enraged millions of people around the world in the process. As importantly, he drew millions of people to the event on TV, the web and in print because of his approach, and the organisers were, almost certainly, delighted about that.

Ricky was paid to be controversial – we aren’t

Gervais was chosen for this event because of his comedy. People knew what he would do. He did it. For the rest of us, insulting people because you don’t understand them or their context just (in most instances) makes us look foolish and or cruel.