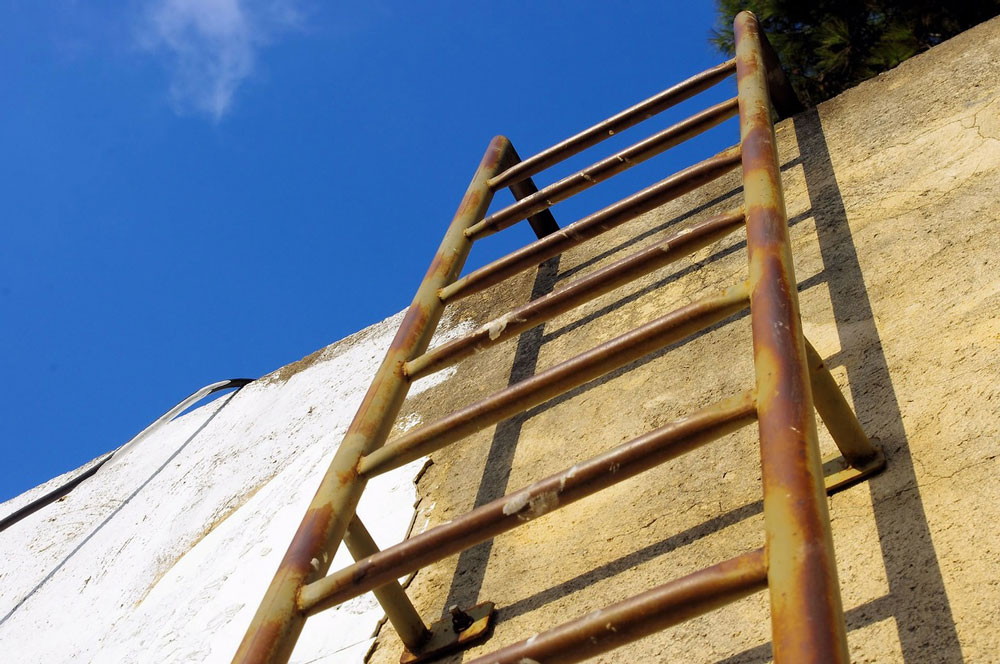 Why a Ladder of Abstraction?

The purpose of a speech is to move people to action. You point an audience to a place where they want to be, a distant hilltop, a better future, a more stable company, a more ‘connected’ life. You make them dissatisfied with where they are now and tempt them with a ‘golden tomorrow’ – and then you’ve got to show them how to get there. Or at least, you do if you want to be great.

If you simply point to the top of a far away distant hill and say ‘see ya’ you don’t help an audience start the journey. You raise their eyes to the far horizon, then just leave them hanging. And we all know what that’s like, it’s annoying, frustrating and it harms the speaker.

We should remember that even the longest journey begins with a single step. Our journey as a speaker is surely to point the audience to a concept. In this case, a long and difficult journey, and then show them how they might get there. We have to give them hope, and start them on their way.

The best speeches and speakers bridge the gap between the far distance and the first steps. We call them inspirational because they make the difficult, doable. Think about some of the great speeches throughout history… Dr. Martin Luther King painted a picture of a better future, and if he’d stopped there, at the picture, it would have been a beautiful ‘dream’ with no plan to back it up. The audience would, probably, have been lost in this utopian idea, with no route to ever see it come to fruition. It might have been a pretty speech, but it wouldn’t have lit a fire from Selma to Obama, and be one of the most quoted, loved and inspiring speeches that the world has ever heard.

How did Martin Luther King, Jr. move people to his mountain? In technical terms, he bridged a gap between an abstract concept and a concrete first step. In a speechwriter’s language he used the ‘Ladder of Abstraction’ (LoA). If your future lies in helping people change the world with their words, then the LoA is a concept that you must understand completely and use rigorously if you want to move your audiences.

The LoA is a simple tool that gives a speaker the ability to plant a seed in the audience’s mind, and help them grow that seed into a deeply rooted idea by providing a framework that supports the original abstract idea.

The LoA requires that you understand your audience’s perception of your message during different stages of your speech by providing clues to shape the way they receive your message.  We’ll cover this with some real world examples from Dr. Martin Luther King’s “I have a dream” speech, and Steve Jobs’ iPhone launch keynote, later in the article.

The Ladder of Abstraction Explained 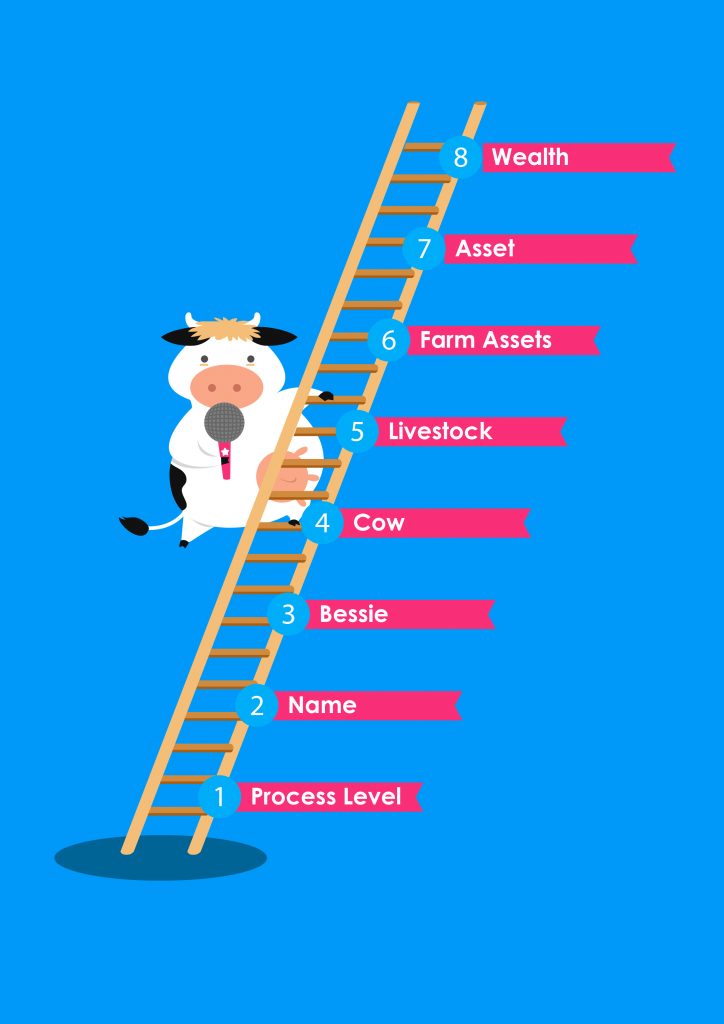 Perhaps the best known example of the concept comes from its creator, S.I Hayakawa. His book, Language in Thought and Action, details the different categories a farmer uses to identify his beloved cow, “Bessie.” The number one represents the bottom of the ladder, moving up to number eight.

How can this be applied to public speaking?

Using the LoA deliberately is a great way for a speaker to keep an audience informed and engaged. By using abstract concepts, you’re able to capture the audience’s imagination, and then you lead them on a path to making those concepts into a reality by providing actual ways of doing so.

At its most simple form, the ladder could have as few as three rungs. Again, from bottom to top, they might be

The bottom of the ladder is for specific, detailed, and ‘real’ things.

And finally, the top of the ladder is for abstract concepts

Examples of the ladder of abstraction from famous speeches

Dr. King’s ‘Dream’ speech sets the precedent for a “down the ladder” approach. He begins with his ‘Big Idea’ –  ‘I have a dream.’ It was a beautiful dream consisting of a number of different concepts, and the ‘dream’ is almost the definition of an abstract term, that would sit right on the top rung of the ladder of abstraction.

As he continues, he describes the concepts that make up that dream: Freedom, Liberty, Justice, Equality. These are still abstract terms, but together they define the elements that would have to be achieved to make the ‘dream’ a reality. This is our middle rung on the ladder.

Finally, Dr. King gives real, concrete examples of what will need to happen for his dream to be realized. His famous line, “One day, on the red hills of Georgia, sons of former slaves and the sons of former slave owners, will be able to sit down at the table of brotherhood.” He goes on to describe how one day Mississippi will be transformed from a state of oppression into an oasis of freedom and justice. He continues providing concrete examples of equality, mentioning specific states and political figures, in order to provide context for his audience.

Using the ladder of abstraction in business

Another great example of the “down the ladder” approach is Steve Jobs’ keynote introducing the iPhone in 2007. Jobs was launching a whole new product here and it was important for him and Apple to make sure that the world knew that they had created a whole new product.

Jobs begins his sales pitch by saying “Today Apple reinvents the phone.” The (very friendly) audience roars its approval, and Jobs summarizes his ‘reinvention’ by breaking that ‘top of the ladder’ abstraction down into smaller chunks. He declares that this ‘iPhone’ is 3 ‘products in one’. ‘An iPod, a Phone and an internet communicator’.

His next step down the ladder was to help the audience understand what exactly was being reinvented with the iPhone. “We wanted to make a smartphone that’s way smarter than any other phone, and easy to use,” he says. He shows a classic ‘4-box grid’ to the audience, and gives a few examples of not-so-easy to use smartphones, and the audience gets what he’s trying to say.

Jobs continues the 1 hour and 20-minute speech by giving specific examples of the ‘smart and easy to use’ product, in the 3 constituent chunks he’d outlined at the start (iPod, phone and browser) to make his point. He showed us elements of the whole product:

And he demonstrated key functions of each of the constituent parts that made up the iPhone.

Jobs’ ability to explain and enthuse audiences was directly influenced by his ability to move his audience up and down the ladder of abstraction deliberately, repeatedly and fluently.

It’s possible, of course, to use an “up the ladder” approach as well, where you start with concrete details and weave them together into an impressive ‘whole’, and then create your big idea from the ‘ground up’.

If Steve Jobs had taken a ‘bottom up’ approach he’d have started with the examples and demonstrations, and worked up to the Big Idea, and finished with his ‘dream’ – ‘Apple has reinvented the mobile phone…’ Why do you think he didn’t?

If MLK had used an ‘up the ladder approach’ he’d have started with concrete examples of discrimination against his people, then he’d have moved on to laws that needed changing, and states in the US that discriminated most against African Americans, and he’d have finished with abstract notions of Justice, equality and his ‘Dream’. Why do you think he didn’t do that?

We can only guess at the answers but in my view it’s because the ‘Big Idea’ grabs the attention of the audience and engages them in the rest of the speech. Leave them waiting until the end for your ‘big idea’ and people can lose patience and interest.

In reality both MLK and Jobs start at the top level of abstraction and work down through the levels to the concrete, examples of what all of this high-fallutin’ stuff means, and then work their way back up afterwards from the small details to the big idea at the end.

In this clip from the iPhone launch, see how Jobs begins his summary and conclusion of the whole pitch, at the smallest level of detail and work back up to the ‘Big Idea’ just before he unveils the price.

So great writers and speakers would usually start with the big Idea at the top of the ladder and work down to the grain to make the inspiring abstract a concrete reality. It’s that combination of the ‘what and how’ that makes for the most inspiring and memorable pitches, political speeches and technical presentations.

Churchill’s famous Blood, Toil, Tears and Sweat Speech from 1940 is a great example of an “Up the ladder” approach. He begins by detailing how they’ve created a war cabinet in an effort to fight the growing Nazi threat in Europe, detailing how the new administration has been formed, including how many party members, and so on. He moves on from there, up to the middle of the ladder, saying “You ask, what is our policy? I can say: It is to wage war, by sea, land and air, with all our might and with all the strength that God can give us; to wage war against a monstrous tyranny, never surpassed in the dark, lamentable catalogue of human crime. That is our policy.”  Finally, Churchill ends with an abstract idea, leaving the audience with the ultimate dream to be attained.

“You ask, what is our aim? I can answer in one word: It is victory, victory at all costs, victory in spite of all terror, victory, however long and hard the road may be; for without victory, there is no survival.”

Churchill details the process of how the British will fight the Nazi empire, and slowly moves up the ladder to an abstract concept as an ultimate goal.

So it is possible to build to a crescendo or a ‘big finish’ by using an ‘up the ladder strategy’, but there’s always the risk that people will switch off.

Common Presenter Mistakes with the Ladder of Abstraction

The most common mistakes that writers and speakers make with the Ladder of Abstraction is either they:

The Ladder of Abstraction is an essential tool for the speechwriter and speechmaker to understand. As a public speaker, you want to inspire your audiences to make a difference in their world by taking action based upon what you say. To move audiences, you have to understand that they need the ‘what’ and the ‘how’ to get them started, particularly when times are tough and change is needed.