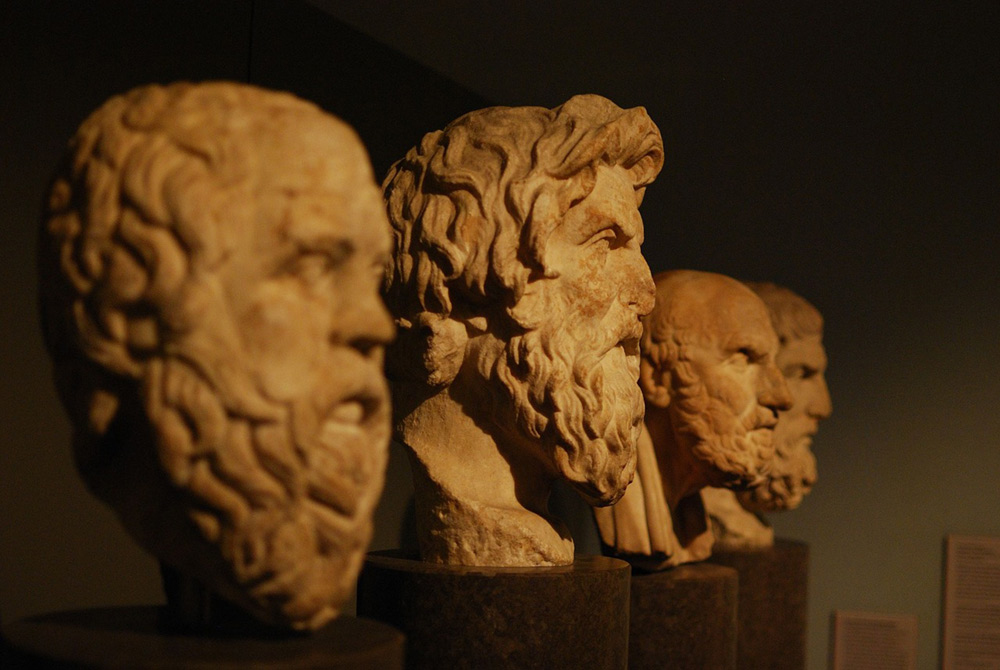 In an earlier post, John Zimmer wrote about Aristotle’s Three Pillars of Rhetoric: Ethos, Pathos and Logos. Here Robert N Sayler, Professor of Rhetoric, Trial and Oral Advocacy at the University of Virginia School of Law takes this further and asks:

How would the unquestioned paragon of inspirational advocacy and rhetoric judge Trump?

That Trump’s buffoonery and unhinged chatter reduces to utter catastrophe.

Let us count the ways:

Crusading against “political correctness”, in favor of “telling it like it is”, he instead unleashes a broadside salvo on correctness itself and repeatedly “tells it like it isn’t”. Politifact, the leading chronicler of political nonsense, gave the 2015 prize for the absolute worst fibbing to a collection of Trumpisms, because ALL of the top award choices were Trump’s.
Others have seen the same pattern, five Huffington Post reporters found 71 inaccurate or deeply questionable claims in his recent CNN Town Hall Event, more than one a minute. Compounding that, he relishes spinning out the patently incredible. Mexico will not pay for his huge fantasy wall. Especially adding in his 1 trillion dollar tax cut, it is mathematically impossible to eliminate the national debt in 8 years as promised.

Grade on the Aristotle Ethos Grid: Deeply in the Red

2. PATHOS – Sparing appeals to emotion, never out of control or calculated to incite to turbulent behavior

Yet Trump routinely rages, flushed face, anger spewing, sputtering, especially when challenged. So he lashes out at entire countries, a 1.5 billion strong religion and scores of individuals he tags cowardly, losers, ugly, un-American, weak or “the worst in history” (the President and Senator Clinton). At rallies, he speaks fondly of trucking folks “out on stretchers”, or deserving a good “punch in the face” and then promises to pay legal bills for assaulters. He says he looks forward to more of that at the Republican Conventions: All of this coming from a man seeking to repose just feet away from the nuclear-code football.

Trump’s is instead a minefield of chaos:

He advances few positive proposals beyond a generic promise to what comes down to “make America White Again”. His only venture into the grist of program details consisted of reading short tax and foreign policy papers prepared by others, read word for word, without apparent conviction or even comprehension. Rather than serving up thought-through proposals, he often resorts instead to railing against what he opposes, eg. world trade, NATO (obsolete), the Geneva Convention, the UN, the President, all “experts”, the “establishment.

He says “they love me”, “I could shoot a loaded gun into a person on 5th Ave without losing a vote”, women especially are smitten (with proof of conquests he openly brags about), to boot my wife is hotter. Then there was his orchestrated, eerily nazi-like, arms outstretched, pledge of undying fealty to him. He incessantly brags about his vast wealth, despite underperforming against The Stock Market since 1982, as stock analysts have shown. He boasts of “many, many” environmental awards in the teeth of an opposite record.

Here pour forth the staccato attacks on Mexican rapists, all Muslims, Carly Fiorina, Meghan Kelly, all “lying” reporters, the Pope, Senator McCain, Gov. Romney (I could have made him “beg” for my endorsement on bended knee), the RNC, “Little Marco”, “no energy Jeb”. . . , the list stretches to infinity. Indeed, the country itself is a weak “loser” says Trump.

His profanity succeeds in overpowering network and parental profanity defenses. In the South Carolina debate, he 31 times loudly interrupted other candidates during their allotted time.

The belittling of Hillary’s “disgusting” bathroom break is beyond bizarre: why think that up, why say so? Just plain zany also was his blast at the NFL, wimpy in efforts to reduce brain injury, owing to his craving to see “good old violent head to head helmet collisions”. His 48 hour early April dancing around on his abortion views were stunning testimony to a disorganized mind ranging from: 1) women should be penalized for choosing abortion, to 2) “but not men”, to 3) let’s penalize the doctors, to 4) “leave it as it is”, (currently legal) to 5) urgent staff “clarifications” to 6) refusing to answer, without “clarification”, whether any of his partners had an abortion.

Without comprehensible explanation, he wants to back off the essence of our bipartisan created network of international security – from those on non-nuclear proliferation, to urging on more nuclear powers (South Korea and Japan), to questioning NATO, the UN and The Geneva Accord. Even more troubling, he says that he wants always to be “unpredictable”, including firing off possible nuclear attacks. It is unsurprising that the March 20 NYT/CBS’s Poll of Republican voters, found that fully 70% were “scared” or “concerned” about a Trump Presidency. Then, citing no analysis in support, he declares that we are a “poor country”, on the verge of a “massive recession”; so he firmly discourages all investment in the stock market. Wow.

All of this is served up in syntax defying diagrams. His sentences turn to paragraphs, then pages, all without periods, peppered by repeated excursions down distracting rabbit holes. To put it squarely: Trump’s rhetoric gushes out as a gruel.

We have seen some of this before, as Professor Hofstadter’s classic study of Paranoid Rhetoric showed 60 years ago – Huey Long, McCarthy, George Wallace, Hitler.

But never has this occurred on this level in degree, decibel, drama. Plato warned that there would come along some scary times when a charlatan demagogue would mate with an angry, malleable mob. Aristotle would likely agree that this is such a time. But Aristotle’s writings also stand for this: calm down, in the end the fairer, more accurate and sensible rhetoric will win out.