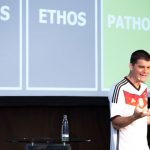 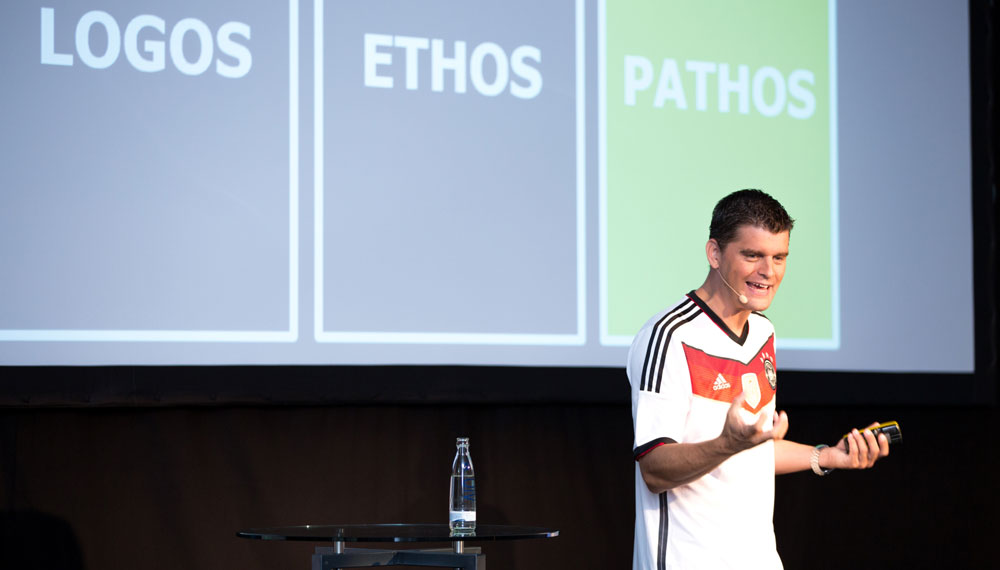 Florian Mueck, from Germany but based in Barcelona, worked as a consultant and business development manager for almost a decade for KPMG, the global advisory firm. Since 2009 he has dedicated himself to helping companies improve their team performances and staff retention by teaching them the power of persuasive communication and memorable presentations. He is the co-creator of the world’s first public speaking game RHETORIC.

We want to help our readers build their skills as presentation designers, speakers and coaches, learning from a wide range of our colleagues from across the world, so in this occasional series, The Guru’s Big Five Questions, we ask the experts the same five questions about inspiration, hopes and role models in the ever-changing arena of world-class presenting. This is what Florian had to say:

Perfection is a concept in which I do not believe. And less so when it comes to public speaking. For me, public speaking is a mountain without a peak. But since you ask, the first speech that pops up in my square German head is a well-rounded speech of only 273 words. In 2014, I visited the Lincoln Memorial in Washington, D.C. When I saw the text carved into one of the walls, I translated it to my then seven-year-old son Alvaro. I got goose bumps.

What I love about the Gettysburg Address by Abraham Lincoln is its concision. At the same time the speech harbors a flood of rhetorical devices and intellectual depth. Plus, we have to consider the critical situation in which it was delivered. It was a time of war. Instead of attacking his opponents, Lincoln opened the door for them. Instead of glorifying the past, he embraced the future of all Americans. The Gettysburg Address is a rhetorical chef-d’oeuvre.

What’s the greatest business presentation and why?

A lot of work and preparation must have gone into those presentations. However, as a professional speaker, I also look for inspiration in everyday situations. When I read your question, right away I remembered the street vendors I saw on the trains in Buenos Aires in 2005. I was visiting my friend Ivan and every day I would take the train to the city center. And every day those street vendors were there. They sold everything: pencils, lighters, underwear. What struck me was their passion and their enthusiasm; the way they engaged with their audience; the positive energy. I have never seen anything like that in any business presentation around the world.

It might seem obvious to say Barack Obama. He has proven to be an outstanding orator again and again. What I love about him is his ability to dig deep not only into logos and ethos, but also pathos. And in his case, it is healthy pathos.

The best political orator whom I have seen live is Miguel Ángel Revilla, the President of Cantabria, a state in northern Spain. Once he visited our club of German executives in Barcelona and gave a keynote speech. It was so refreshing to see a politician speak without any political agenda.

Revilla heads a regional party. He doesn’t have to follow the regime of the big national parties. He used loads of self-deprecating humor, which made him extremely likeable – “They told me, ‘If you don’t know bananas at the age of ten, you’ll never be the President.’ They were wrong.”. He spoke with sincerity – “Can you believe it? I made it into the news only because I took a taxi to meet the President of Spain? What kind of country is this that a taxi ride makes it into the news?”. He addressed difficult topics stating his opinion with conviction. He had us hanging on his every word with his personal stories and views. And all that without notes. A true role model.

For years I had a one-word answer to that question: energy. Content will always be king. But content is also completely overrated. You can turn the most mediocre content into a lifetime experience for the audience. But you will kill the most profound, most meaningful, most inspiring content with poor delivery. Energy, for years, was my word. Energetic body language combined with an energetic voice. That’s it … or so I thought.

Today I give you another word: vulnerability. I’ve had the honor to be the facilitator of more than 7,000 speech evaluations since 2009. Great body language, excellent. Great voice, excellent. But it’s the moments when speakers share their imperfections, when they stand “naked” in front of us – that’s when the magic happens.

I started my speaking and training business because I had no money. My European project that I had given up a corporate career for didn’t take off. In June 2009, I found myself with no income, several expenses and no idea how to continue. I needed money, so I started to turn my passion for public speaking into a profession. My inspiration had neither a first nor a last name. All my inspiration came from Toastmasters International.

Today, I benefit from multiple fountains of inspiration. Fellow professional speakers and trainers like John Zimmer, Olivia Schofield, Tobias Rodrigues or Conor Neill are more valuable to me than anything I would have wanted back in June 2009.

Founder at Florian Mueck - Boosting Your Charisma
Florian, based in Barcelona, worked as a consultant and business development manager for almost a decade for KPMG, the global advisory firm. A collaborator of IESE Business School Barcelona and author of four books, Florian now offers transformational communication seminars, keynote speeches and presentation coaching to international brands like Banco Santander, Microsoft or Panasonic. Florian is the co-creator of the world's first public speaking board game Rhetoric – The Public Speaking Game™.