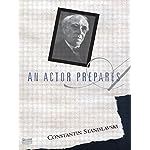 Stanislavski’s simple exercises fire the imagination, and help readers not only discover their own conception of reality but how to reproduce it as well.
So much mystery and veneration surrounds the writings of the great Russian teacher and director Stanislavski that perhaps the greatest surprise awaiting a first-time reader of An Actor Prepares is how conversational, commonsensical, and even at times funny this legendary book is. After many productions with the Moscow Arts Company, Stanislavski sought a way to introduce his new style of acting to the world outside of his rehearsal hall. The resulting book is a “mock diary” of an actor describing a series of exercises and rehearsals in which he participates. He details his own emotional and intellectual reactions to each effort, and how his superficial tricks and mannerisms begin to disappear as he increasingly gives over his conscious ego to a faith in the creative power of his subconscious. Rarely has any writer on the theater achieved the sort of lucid and inspired analysis of the acting process as Stanislavski does here, and his introduction of such now-standard concepts as “the unbroken line,” “the magic if,” and the idea of emotional memory has laid the groundwork for much of the great acting of the 20th century. While much excess and nonsense was to follow in the steps of Stanislavski’s writings, his original texts remain invaluable, and surprisingly accessible, to any actor or student of drama. –John Longenbaugh

Be the first to review “An Actor Prepares” Cancel reply